Anders just loves this iconic half marathon – the biggest half marathon in the world, which this year takes place on Sunday 12 September.

“The main appeal of the GNR is the atmosphere and the people,” the 43-year-old father of two from Stockport told us. “I have family in the North-East so I know the people are great, but there is something about how everyone up there embraces the event and line the whole 13.1-mile course.

“I love how you have kids dressed as Super Mario giving out sweets, old ladies giving out orange slices and even a beer stop not too far from the finish.

“I have run events across the country and nothing else comes close - I mean, where else can you ride the metro with the Loch Ness Monster and a group of lads riding dinosaurs!”

But, as for many of our supporters, the story of why Anders is running to raise money for us is a sad one.

“What got me was the speed of the disease, from what was seen as a sniffle on Tuesday to him passing early Friday is just beyond comprehension.

“I think the bravery Amy and her family showed during this and their resilience is truly admirable, but I want to do all I can to make sure other families don’t have to go through what they did.”

So, alongside the fact he enjoys it so much, the push to raise money for a very worthwhile cause keeps Anders coming back and he has no intention of stopping anytime soon.

“I did stop after 10 GNRs for a few years when my first child was born, but the running bug bit me again three years later so, no, I don't have plans to stop anytime soon.

“I genuinely feel that if the people who have been severely impacted by meningitis and their families can get up each day and carry on then I can drag myself 13.1 miles from Newcastle to South Shields once a year.

“The training does get harder though,” Anders admits. “It was an awful lot easier in 1998 at 20 than it will be in 2021 at 43 and I need to focus a lot more on stretching and cooling down than I ever did, but it is still enjoyable to train and I always feel better for it and I still find running a great stress relief after a long day at work.

“At the back of my mind I would still love to break my personal best of 1 hour and 47 minutes, but the realist in me says that as I set that around 2002 in my early 20s it probably isn’t going to happen. But getting back under two hours would be nice and that’s my aim for this year.” 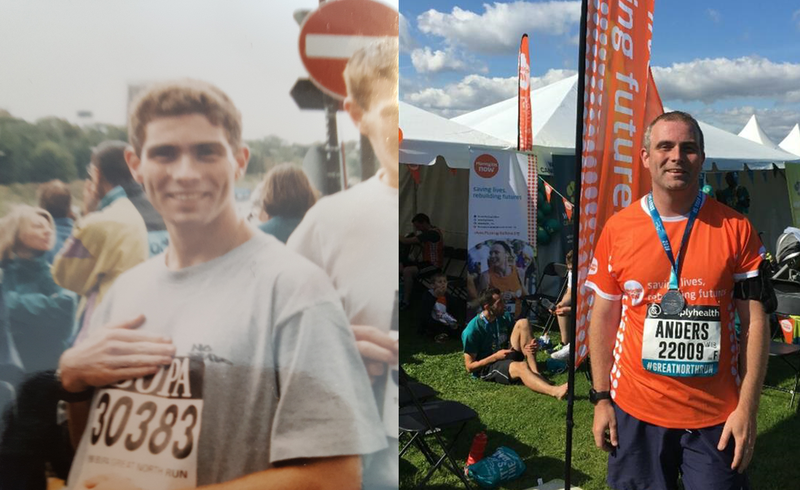 Even working for Barclays as the lead for the Self-Service department Anders can’t just magic up a PIN to get free sponsorship cash – so he goes down the traditional route of asking friends, family and work colleagues.

“I do a much better job at raising money this way than if I tried to bake,” he jokes.

“It’s certainly much easier now with online giving - back when I started I had to send a paper form round the office and then chase people up personally to get the money after the race (with my medal in hand as proof I’d done it!)

“And I am also very lucky that my employer Barclays matches my fundraising, doubling everything I am able to raise, which is a great help.”

More than just the runner

Of course, as with all of our supporters who take on these events on our behalf, Team Anders is far more than just the one person running, and Anders is keen to acknowledge this.

“I would just like to extend thanks to everyone who has supported me over the years, to all those who have sponsored me but especially family members who help me out each year,” he said.

“My wife Suzie who has always supported my running and picked up the slack at home when I’ve been out running for hours in the evening. My kids Jess, 13, and Lucas, 7, for their support and the t-shirts, signs and messages of support they have produced over the years. With last year being a virtual run I had the wonderful experience of them running the last few yards of the virtual GNR with me.

“Also, thanks to Margie and Angelo who put us up each year, my parents who for years would drive me to and from the event and lastly my late Great Aunty Em, who let me stay with her in Whitley Bay every run until she passed away and always tried to fill me with alcohol and dessert the night before the GNR after months of strict eating and training!

“Without all of these people help I wouldn’t have been able to run one Great North Run, let alone 20. Thank you.” 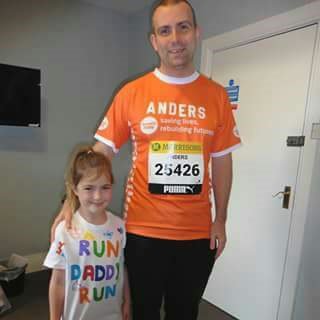 Support Anders and join our #TeamTangerine

If you’d like to support Anders’ efforts this year visit his fundraising page here.

If you’d like to join Anders in this year’s Great North Run there’s still time – you can apply for places until early July. Find out more about the event and sign up here.

If you’ve got your own place you can still run for us and you'll get all of the same support as our charity place runners – get in touch here.