In all, 37 youngsters took part in the event at Bettridge School, while a further 14 also carried out the challenge in their own time.

Charmaine Capener, of Aquatots, said that the event was made all the more meaningful after they spoke to three sets of parents while preparing for the event whose children had contracted meningitis when they were young babies.

“Fortunately, all the children came through the ordeal unscathed - but this was due to the quick responses of both parents and the health service because they recognised the signs and symptoms of the disease and understood the importance of dealing with it quickly,” she said.

In order to raise the money for Meningitis Now, each Aquatot was given a “Splash, Paddle of Move” challenge which Charmaine said was made up of familiar exercises from their Aquatots programme and allocated according to age and existing skills.

“Everybody had so much fun and managed to complete each individual challenge with lots of laughter and splashing!”

Charmaine said they had decided to do Splash because as an Early Years Swim School their target age group was the 0-5’s – who were also the most at risk for meningitis. “We felt a responsibility to highlight the symptoms of meningitis as children in this age group are more vulnerable,” she said.

“And as Meningitis Now is located in Gloucestershire, the same county as our headquarters, we also wanted to support a locally based charity that does such tremendous work on a national level.

“We are so proud of the Aquatots that participated – watching children playing confidently and safely in the water is always a great reward. An additional bonus was knowing that we had helped to raise awareness of meningitis to many more people due to promoting the event on our social media and website. We would definitely encourage anybody to run or take part in a Splash Now event – having fun whilst raising money is a great combination!” 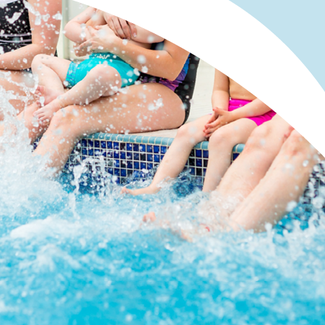