Their current total of over £67,000 has been raised through attending events like the South Gloucestershire Show, cake bakes, themed hampers and the ever-popular pop-up-lunches.

Now, ten brave and intrepid souls from the company have joined 10,000 other runners by taking on this year’s Bristol Half Marathon on Sunday 15 September.

Their efforts added a further £6,710 to the company’s running total, as they move ever closer to their pledged £100,000 target to help us fight meningitis.

Paul Pritchard recorded the best time of 1:40:12 but the whole team enjoyed the 13.1 mile route, which winds its way around Bristol’s famous harbour, along the Avon Gorge and under the Clifton Suspension Bridge, taking in many of the historic landmarks of Bristol. Support from the crowds added to the festival atmosphere and the weather on the day was a great help too.

Clare Raby, Marketing and Media Manager at B&A, said, “Everyone thoroughly enjoyed the occasion and our intrepid team from B&A plan to do it all again and be back next year.”

Rob Lewis commented, “A few of us are trying to run every week to keep the legs moving. If all goes well we wish to enter next year and hope to run even faster.”

As well as the satisfaction of completing the run and raising such valuable awareness and funds for us, the B&A team were also winners and runners-up in the Simplyhealth Great Bristol Half Marathon ENGIE Business Challenge for mixed teams of runners in the medium business category - congratulations. 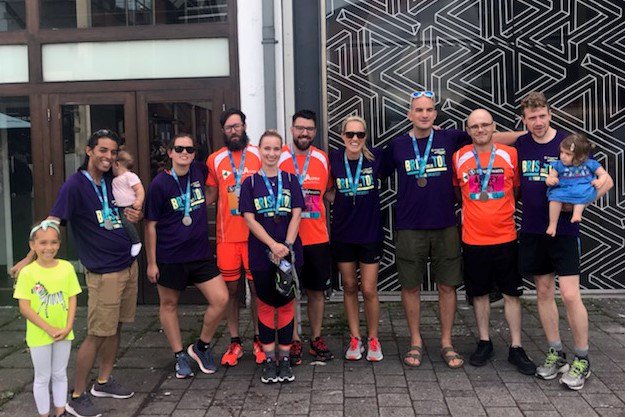 Matt Stephenson, our Corporate Fundraiser, added, “What another brilliant effort by the team at B&A and we’re so grateful to them for everything they do and their continued support."

“Thanks to their efforts we’re moving ever closer to achieving our vision, where no one dies from this disease and everyone affected gets the support they need.”

B&A’s founder Jimmy Berkely was always a big supporter of our executive founder Steve Dayman and his dedication to finding a vaccine to eliminate this pernicious and deadly disease. Now, his children Kevin, Aidan and Clare Berkely have taken up the baton left by their father and have pledged to raise £100,000 for our work towards the elimination of this dreadful disease.

You can read more about B&A and their support here.