“We’ve enjoyed hosting many garden parties and other fundraisers to fight the horrendous disease, but it’s tiring and we’re of a certain age.”

“It’s sad to call it a day because many who’ve enjoyed the parties voiced their sadness.”

“We’ve loved hosting so many people and are delighted with the amount raised.”

Meningitis Now founder Steve Dayman, who has known Marion for around 20 years and attends every year, ran a cake stall on June 4. Mr Dayman MBE launched the UK’s meningitis movement after losing his baby son Spencer to the disease in 1982.

The couple celebrated retirement with a meal at The Brook Inn, Plympton, and presented Mr Dayman with a cheque.

“I’ll miss their fundraisers, but I thank them for everything they’ve done.”

“Their efforts have saved lives and advanced the eradication of meningitis.”

“However, I’d be surprised if they completely call it a day.”

“Without dedicated supporters like them, we couldn’t continue to fund pioneering preventative research, raise lifesaving awareness and support people affected.” 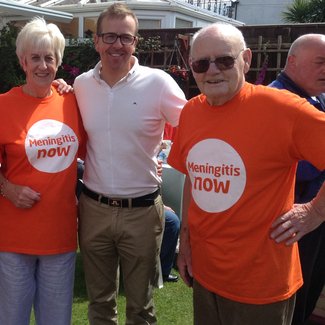 Meningitis Now would not exist without the generosity of people like you. With your help we can fund lifesaving research and awareness, and support those affected by the disease in the UK. Donate now