The ball celebrates what would have been Calum’s 21st birthday and which you are all invited to be part of.

Calum contracted meningitis in Oct 2007. Waking with a severe headache at 3am, he was taken to hospital, but by 6am was on a ventilator fighting for his life.

Sadly the disease had attacked his brain stem and nothing could be done to save him. His parents, Sinclair and Kim, made the brave decision to donate his organs as they were unaffected.

Five people are alive today through this gift.

Calum’s sister, Kirsten, now 16, chose the theme based on a favourite film with the perfect sentiment.

Being held on Thursday 10 December at The Eagle Lodge, Bishopbriggs, the event is in aid of Meningitis Now in celebration of Calum’s life.

“Meningitis Now provided support to us as a family at the worst time in our lives. Fundraising in Calum’s memory has given family and friends an opportunity to give back and help others affected by this terrible disease.”

“Meningitis is a terrible thing for anyone to suffer and the results are devastating to all concerned. It can strike at anytime and kill within hours. The work that has been carried out by Meningitis Now has been vital to prevent this terrible disease and make people more aware of meningitis and its impact.”

The event starts at 7.00pm, with glass of bubbly on arrival, buffet and dancing. 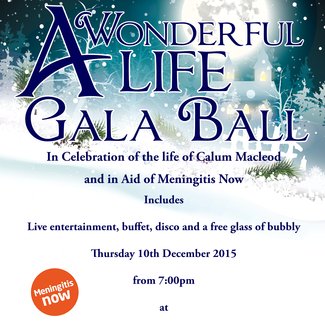