Chris Rainbow’s six-week-old daughter Martha contracted viral meningitis in December 2015 but thankfully is now a bubbly and confident three-year-old with no lasting after-effects from her illness.

Chris, who is taking on the marathon on Sunday 28 April for us, said, “Martha was not herself, she was unusually lethargic, grunting whilst asleep and spiking a temperature over 41 degrees."

“She spent a week in Lister Hospital in Stevenage receiving the best care any parent could want and was allowed home for Christmas.”

In search of support

Chris and his family turned to the charity for support during those difficult days.

“Not knowing a great deal about meningitis, we found the Meningitis Now website very informative."

“It enabled me and my wife Liane to make sense of what Martha was going through and the support that was available.”

Committed fundraiser Chris has previously taken on the Three Peaks Challenge for us, and has also challenged himself to cycle 100 miles in the Prudential RideLondon-Surrey 100 and swim two miles in Swim Serpentine this year.

Small way to say thanks

“To commit to running 26.2 miles and take on the other events is a small way for me to show my thanks for the care and support Martha, and her cousin Ossie who also contracted meningitis, received and to enable Meningitis Now to continue to help people affected."

“We count our blessings every day for our gorgeous Martha but many people aren’t as lucky as us."

“Meningitis can devastate families so please donate and raise money to help people who haven’t been as fortunate as us and to help raise awareness of this illness.”

You can support Chris’s efforts on his charity page at https://uk.virginmoneygiving.com/ChrisRainbow.

Kirsty Owen-Hayward, Events Fundraiser at Meningitis Now, said, “Thank you so much to Chris for supporting our work in this way. Seeing their child suffer is something no parent should have to go through and with your support we can fight back against this disease.” 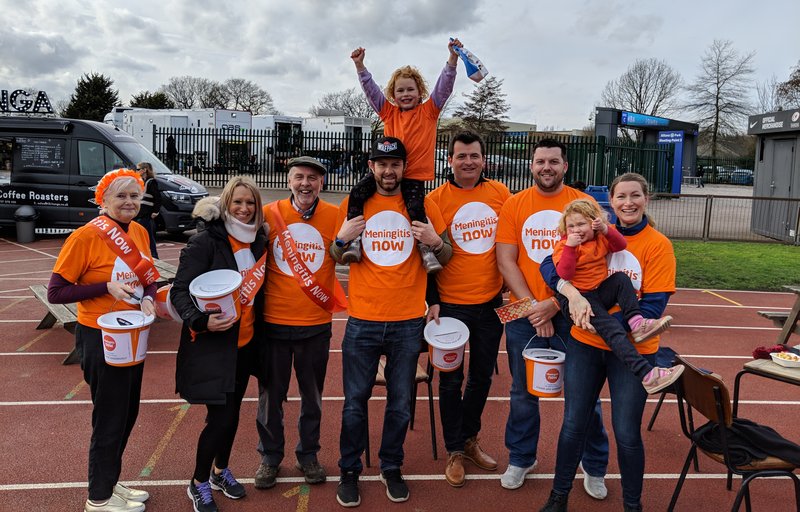 The photo of Chris, Martha and supporters is from his recent bucket collection, which raised a whopping £1,138 towards his marathon fundraising.