Heading up the group was the appropriately named Paris Mcallan, who decided to raise funds for the charity after her daughter Evie survived a brush with the disease.

Paris, from Leicester, said the plan was first hatched between her boyfriend and a friend who decided to ride to the French capital even though neither were apparently very fit. In fact, said Paris, “they sport more of a beer belly physique than anything remotely similar to what you imagine a fit cyclist to be!”

It wasn’t long before Paris decided she wanted to join the original pair and then two more signed up until they were a party of five. As Paris explained, all of the three new recruits were at least fitter than the original two – she is a dancer, another was a “huge runner and extremely fit” and the other had spent six months cycling round India last year.

The group decided to arrange everything themselves rather than joining an organised ride – which meant they had no assistance vehicle, just the five of them plus their bikes. And then they were off!

“The three days were so fun, but we were also riding in a heatwave so it was extremely tough,” said Paris.

“The whole team were so supportive of one another though.

“I was the only one who fell off my bike – on day one too! Jacob got a flat tyre but he’s a master of repair and had it sorted before I was even awake the next day”. 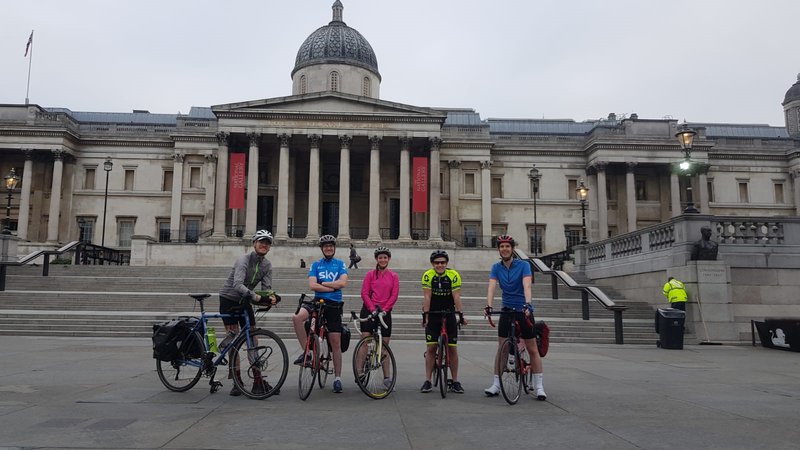 There was no doubt that riding in the middle of the heatwave made this challenge a particularly tough one so the brave cyclists were up early to set out in the mornings. Their route over three days took them from Trafalgar Square in London to Newhaven and then a ferry to Dieppe, from Dieppe to Beavais and then from Beavais on to Paris.

Here they finished up their adventure in front of the Louvre – and were finally able to celebrate their epic journey.

Well done to Paris and her four cycling pals – we hope you weren’t too saddle sore!

If you are feeling inspired by Paris and friend’s marathon cycle, you can join an organised tour for our London to Paris bike ride! Or, why not sign up to do the Prudential RideLondon-Surrey 100 in 2020?