Ross and Hannah Parker, from Chester-le-Street, ran together in the iconic half marathon race which took place in September. Runners start in Newcastle and end their race 13.1 miles later in South Shields.

Ross said this was the fifth time he had taken part in the race – but that this year, in order to run with first-timer Hannah, he decided to start alongside her at the back rather than try and beat his personal best.

“It was still a brilliant day though,” he said.

“From a purely selfish basis I didn’t run as fast as I would like to as I started in the middle of a big crowd and had to run around people, but it was still really enjoyable."

“And we also smashed our £600 fundraising target – so it was all worthwhile, even if I didn’t beat my personal best time”.

He also admitted that while he didn’t get his best time, his wife finished in a “very respectable” sub-2.5 hours – and has already said she’s keen to do it again next year.

Ross and Hannah were running for Meningitis Now after their daughter, Aubrey, fell ill in January 2015 at the age of just six months.

The terrifying ordeal started after a night of vomiting, when Aubrey was recording a temperature of 42 degrees and was sent straight to hospital even though she didn’t have a rash.

“Nine gruelling nights continued as we saw our happy, joyful baby have the life drained out of her,” said Ross.

“As any parent will understand, for a small child not to have a whimper while various doctors extracted blood and performed a lumbar puncture – we knew something was seriously wrong”.

Aubrey was diagnosed with pneumococcal meningitis and at one stage the Parkers were taken to one side and warned by a doctor that she might not make it. This, said Ross, was incredibly harrowing – but made him all the more proud when his daughter gradually began to pull through.

“On the fourth day of being in hospital we heard Aubrey cry and even managed to crack a smile,” he said.

“Our little girl was starting to recover and nothing could have delighted us more than to have her at that very moment”. 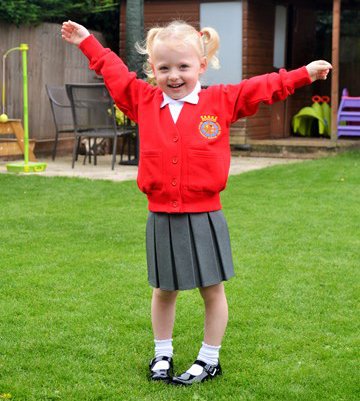 May not have been so lucky

On the seventh day in the hospital, and with the worst behind them, Ross and Hannah celebrated – with a take away pizza delivered directly to the paediatric ward!

“We can never thank the doctors and nurses enough for all they have done – if it wasn’t for their quick diagnoses we may not have been so lucky,” added Ross.

“If we could educate anyone on meningitis it would be to not always look for the rash. Aubrey had no sign of the rash and yet she contracted the most fatal type of meningitis there is."

“But luckily for us this story has a happy ending and Aubrey is now a happy, clever and gorgeous little five year old!”