Gemma Muckle, of Brightlingsea, is holding her third annual Fancy Dress Charity Night to raise funds for us and fight back against the disease that struck her son Vincent at just four months old.

Thankfully Vincent survived but the youngster has been left with after-effects, including loss of hearing and autism.

Vincent became ill in June 2013 over the weekend of the local carnival.

“It was a very sunny, warm weekend and throughout the day I noticed Vincent was beginning to get quite whingey in the sun so I decided to take him home."

“That night he was very unsettled and lethargic. His temperature was okay but I decided to take him to the doctors the following morning to get checked out."

A spot on his chin

“In the time it took us to make the journey to the hospital, the spot had spread into a rash all over his shoulders."

“I remember telling my husband ‘it’s meningitis, I just know it’ but he told me not to be silly, there was no way. But unfortunately I was right."

“Thankfully, he responded well to treatment."

“We’re very lucky that Vincent hasn’t suffered any physical after-effects, but he has a slight loss of hearing."

Couldn’t tell us what he was feeling

“Watching Vincent go through this was so hard. Because he was a baby, he couldn’t tell us how he was feeling."

“That’s why it’s so important for parents to be aware of all the signs and symptoms of meningitis. Trust your instincts – if something’s not right, get them checked out, it’s better to be safe than sorry.”

Since Vincent contracted meningitis Gemma has held a charity night each year to help raise funds for the research needed to find a cure for all strands of meningitis, so other families don’t have to go through what they did.

This year’s Fancy Dress Charity Night takes place at the Brewers Arms in Brightlingsea from 7pm on Saturday 29 August. There will also be live music and a raffle. Entry is £2 per person if they’re in costume; £5 if not.

Gemma is hoping to add to the £1,800 she has raised for us over the last two years. 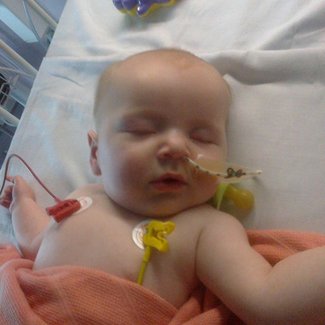 Vincent’s meningitis story begins in June 2013 when he was just four months old. The rapid deterioration of this brutal disease changed him from a happy, healthy little boy to a very sick baby in need of immediate surgery within 48 hours. Read more