The team, known as ‘Team Princess Sophia’ has pulled together for a number of fundraisers, including a breakfast morning and pub quiz and disco, which together raised over £3,000.

Dad, Chris, has also run the Belfast half marathon dressed in a morph suit and taken part in a cycling event to boost the totals to a fantastic £5k.

Sophia contracted Pneumococcal meningitis and septicaemia in December 2014 when she was just three months old. We have been there to support Sophia and her family, helping them cope with the impact meningitis has had on their lives.

Your support is fundamental

With no central Government funding we are reliant on the generosity of our supporters and fundraising events like these.

Every penny raised will help us continue our lifesaving work, funding pioneering preventative research, awareness and lifelong support for families like Sophia’s. 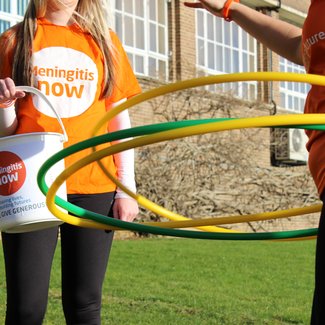 Do you want to fundraise for us?

There are a number of ways you can help raise money for us. It could be taking part in one of our events, getting sponsored to jump out of a plane, selling cakes or buying a pack of our Christmas cards. The opportunities are endless! Find out more