The biking enthusiast, from Southampton, began his epic journey in Auckland, New Zealand on 3 November and plans to cycle back to the UK over the next year in a big to raise money for us.

George’s route will take him across mountain ranges, deserts and through some of the harshest terrains known to man.

He started by cycling to the bottom of New Zealand’s South Island before flying to Hong Kong, where he has begun his journey through China, Vietnam, Cambodia, Laos, Thailand, Myanmar and India.

Here George will board a plane to Turkey and cycle through Bulgaria, Romania, Hungary, Slovakia, the Czech Republic, Germany, Belgium, France before finally ending his trip back in the UK.

“I've spent the last year working and travelling in Australia. My visa had come to an end, meaning I had to return to England, so I decided to do what any sane 21 year old would do...make my way home using the good old fashioned bicycle!”

“This is going to be a trip of a lifetime and I am going to experience countries in a way that you just can't do by public transport.”

George has chosen to fundraise for us after best friend, and Meningitis Now Young Ambassador, Mat Johnstone, contracted meningococcal group Y in November 2010.

“I'm choosing to raise money for Meningitis Now as the charity supported Mat and his family though every stage of his illness. Also to raise the profile of meningitis and its symptoms - Mat's illness could have been spotted much earlier with raised awareness amongst the public and health care professionals.”

“George’s plan is incredible – it will take so much strength, grit and determination. This challenge will be beyond tough, both emotionally and physically, and we wish him the best of luck!"

“Challenges like these make such a big difference to us – we rely solely on the generosity of our supporters as we receive no central government funding.”

Mat was unable to move or feel anything from the waist down after contracting meningitis and required intensive physio therapy to get sensation and movement back in his lower limbs. Mat has improved significantly and is now able to walk and do the things he loves, such as play sports, once again.

As a Young Ambassador, Mat is a mouthpiece for the charity, raising lifesaving awareness, campaigning and fundraising on our behalf. 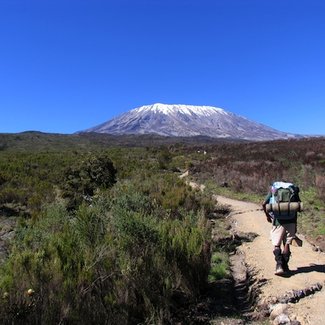 Are you inspired to take on an overseas adventure?

If, like George, you’re thirsty for a new adventure, why not take on one of our overseas challenges? Whether it’s cycling through the streets of Vietnam, trekking across the Patagonian Andes or sledging through Lapland, there’s something for everyone. Find out more