And in these Covid-19 restricted times that’s exactly how our supporter Greg Burton will be doing it.

Greg, from Mansfield in Nottinghamshire, has decided to do something he wouldn't have even dreamed of doing before. He is going to climb Mount Everest by using the stairs in his block of flats.

“I have given myself a time limit of 30 days to do this epic challenge.”

With progress so far having been so swift, Greg’s challenge is definitely on the up.

He added: “I have already climbed the highest peak in England in just over one hour and thirty minutes!”

Greg has started the challenge to improve his own fitness and wellbeing and to prove to himself that he can do anything he puts his mind to.

But he’s also set himself the target of raising £250 towards our vital ongoing work and the same amount for mental health charities.

Lost a baby boy to meningitis

“My family lost a baby boy - Brayden - at six months old to this terrible disease,” he said.

“We still struggle because we lost Brayden so young, but we have learned to deal with his passing.

“However, we will never forget how much of a mark he left on us, especially his mother, who is also my sister Naomi. She struggles on his birthday and death date, which is to be expected.

“I want to do this mainly for her."

“By the time I have finished my climb I’ll feel as if I can say hello to Brayden again and tell him we miss him so much and can't wait for us to be reunited once again, wherever he may be.”

Greg added: “People who know me personally will also know I have had my demons with mental health for over four years now. I also want to let people know this is a serious thing to have to deal with.”

Family and friends are supporting Greg’s efforts and you can too by going to his Facebook fundraiser.

“Any sort of donation would be absolutely fantastic and could help save someone's life,” Greg added. “Thank you all for reading and supporting me and millions of others around the world at this very sad time we are currently living in.”

Thank you for your support Greg and good luck with the ascent.

Stop Press (or should that be Step Press?) - 23 February

Greg has now completed his ascent of Everest, one step at a time. As if the challenge wasn't difficult enough, he decided to don fancy dress for the final ascent to the summit! Many congratulations Greg on achieving your goal, raising a fantastic £700 for our vital, lifesaving and life-changing work in the process, and a huge thank you for your support. We wish you well for your next challenge, whatever that may be. 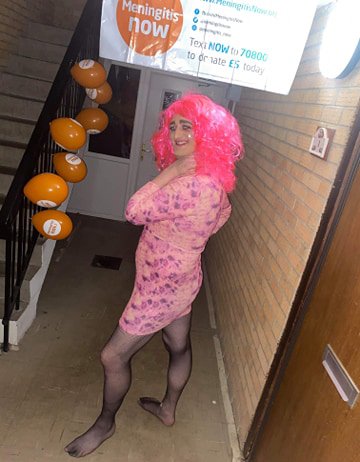