Bringing together data from 146 charity, professional and public sector organisations, including Meningitis Now, the UK Health Research Analysis 2018 found that in 2018 these funders contributed £4.8 billion to support research to improve human health.

The report notes that main areas to receive the highest increases in proportion of investment were research activities important for translation - research that aids translating scientific discoveries into new treatments and healthcare benefits. Early detection of disease and the development and evaluation of new treatments were the main areas that received increased funding, totalling £523 million over 14 years.

Half of public and charity support for health research was directed at basic science, which underpins further study or seeks to identify the causes and progression of disease. It is this discovery science that will provide a pipeline of new potentially transformative ideas, technologies and methods for the future.

Funders have continued to increase funding for other areas, such as prevention-related research (eg. vaccine development and smoking/dietary interventions), that were identified as having lower investment in previous UK health research analyses.

The report highlights that public and charity funders support research into a diverse range of disease areas, with the largest increase in support for research into infectious diseases. While disease burden in the UK in this area is low, this research includes efforts to combat the global health risk of pandemics and antimicrobial resistance.

Cancer research continued to attract a substantial proportion of total funding, with high levels of charity support. Cancer is the disease that leads to the highest UK disease burden, according to the World Health Organisation.

The report includes data from 82 new funders – bringing the total of 146 funders to more than double the number included in the 2014 report – and included coding of over 22,500 projects.

It is the first report in the series to undertake a detailed analysis of international funding support for UK research teams (totalling £240 million income to the UK in 2018) and the first to record UK funder contributions to research overseas (totalling £220 million funding to 66 countries in 2018).

In addition to the £4.8 billion of public and charity 2018 funding detailed in this report, the authors have provided estimates for the total expenditure on health research in the UK. Estimates for expenditure in the pharmaceutical sector (£4.3 billion in 2017, continuing the recent recovery following the economic crisis of 2008), brought the estimated total for UK health research to £8.67 billion.

This dataset has been made publicly available so that other funders can perform their own analyses to promote the use of landscaping analyses to better support biomedical funding in the future.

Read more about our research programme. 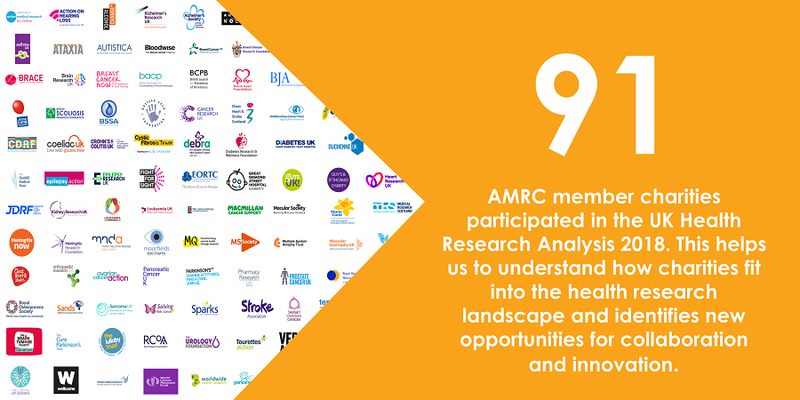