Well, that’s what our supporter, former Welsh rugby international full back Justin Thomas, did by auctioning off a collection of his prized rugby shirts to raise funds for our ongoing work, raising an amazing £1,700 in the process.

Justin and his wife Emma have been supporters of our work since their baby son Rhys became ill with pneumococcal meningitis in 2002. Thankfully Rhys went on to make a good recovery and is now following in his dad’s sporting footsteps by studying a BSc in Sports Management and Coaching at Bath University. You can read Rhys' full meningitis story here.

Teacher Justin told us: “I had a collection of international rugby shirts that I swapped when playing and they were just in a suitcase in the attic not being used and enjoyed.

“I was fortunate when I was younger to play at Carmarthen Athletic RFC (who have one of the most famous sporting boot and jersey collections in the world) that helped inspire me to dream about playing, so I thought I should pass them on to people who could enjoy them and help inspire other people.

“Quite a few people had asked me over the years about jerseys that I had, and that they would be interested in giving a donation to charity for them, so I then decided to do a silent auction.”

Justin auctioned six jerseys in total, including the Scotland and Ireland jerseys from the Wales Five Nations 1996 tournament. Also included in the auction were the Brive jersey from the Cardiff v Brive semi-final of the European Cup from 1997, Wales 7s 2001 world series, Argentina 7s 2001 world series and Fiji v Wales 1995.

“I don’t collect memorabilia as such,” Justin said, “but I do enjoy the memories they hold when I see shirts and appreciate the hard work that is required to achieve being part of the history of the jersey.”

Justin was expecting to raise a couple of hundred pounds and have just a few bids but was taken aback by the response he got. “The messages I received were non-stop for three days at all times of day!” he said. “And they came from across the world – from Ireland, France and America.”

It wasn’t Justin’s first fundraising effort on our behalf. In August 2015 he cycled across Wales from the Severn Bridge to St David's with a couple of friends. The ride took place over a weekend and covered 155 miles in total, raising £1,500. Also, his sister-in-law ran the London Marathon just after Rhys had recovered and raised £1,500 too. 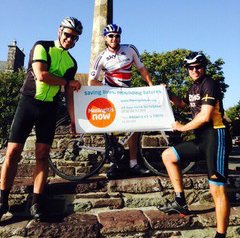 And he’s not finished yet. This summer he hopes to cycle from North to South Wales with a couple of friends to support us further.

Sophia Lanciano Newman, our Fundraising Officer, said: “What a fabulous response to Justin’s online auction and we’re so grateful to him and Emma for everything they’re doing to support our work and helping us kick meningitis into touch.

“Their support will make a real difference to those who are at risk of meningitis and those whose lives have already been changed forever because of it – thank you.”