Mark, from Southampton now but originally from Dartmouth, is taking on the Southampton Half Marathon for us next weekend. You’ll be able to spot him. He’ll be the one running in scuba gear, trailing Meningitis Now balloons.

It’s all in a great cause though – he’s raising hundreds towards our lifesaving and life-changing work and the promise of running in scuba gear has in turn drawn promises of extra sponsorship.

And Mark’s no stranger to being noticed – some years ago now he did the Great South Run for the Meningitis Trust (the previous name for Meningitis Now) dressed as the charity’s then mascot, Monty the Duck. Hard to miss.

Mark supports our work because his wife Carol became ill but fortunately recovered from meningitis about 10 years ago.

He told us: “Carol felt ‘off’ on the Saturday. By the Sunday morning she still wasn't feeling well, and then we saw the typical red rash. I rang 101, who were not very helpful, and vague, so I decided to take her to the hospital.

“As soon as she was seen by a nurse, then everyone sprang into action. Within five minutes she was in resus, having lines put in her.

“She was put into an induced coma for 24 hours and spent 10 days in Winchester Hospital, where luckily she made a full recovery.

“My nephew was also diagnosed with meningitis as a child, and fortunately again made a full recovery.”

Jogging to get fit

Recently the 58-year-old father of two, who works part-time for Sainsbury’s, decided to start jogging to get fit.

“I set myself a target of running a half marathon, and chose my local one in Southampton.

“Friends and family soon asked if I was running for a charity, and as I had previously run the Great South Run for meningitis, wearing the mascot costume, I decided to run for Meningitis Now.

“My donations were coming in well, and when I reached around £350, I put on Facebook that if I reached £500, I would run with scuba kit.

“Years ago I did a few runs with the kit, as scuba diving is one of my pastimes. Suddenly my funds went over the £500, so no turning back!

Aiming to get round in one piece

“I have done a few 5k training runs with the scuba gear, which weighs about 12kg, and have had to add a bit of foam to my back plate to reduce rubbing and chaffing to my back and shoulders.

“If I ran the half marathon without the kit, my target would be around 2 1/2 hours, but with the scuba gear I reckon around 3-3 1/2 hours.

“But really I am just aiming to get around in one piece, and finish on the same day as I started.” 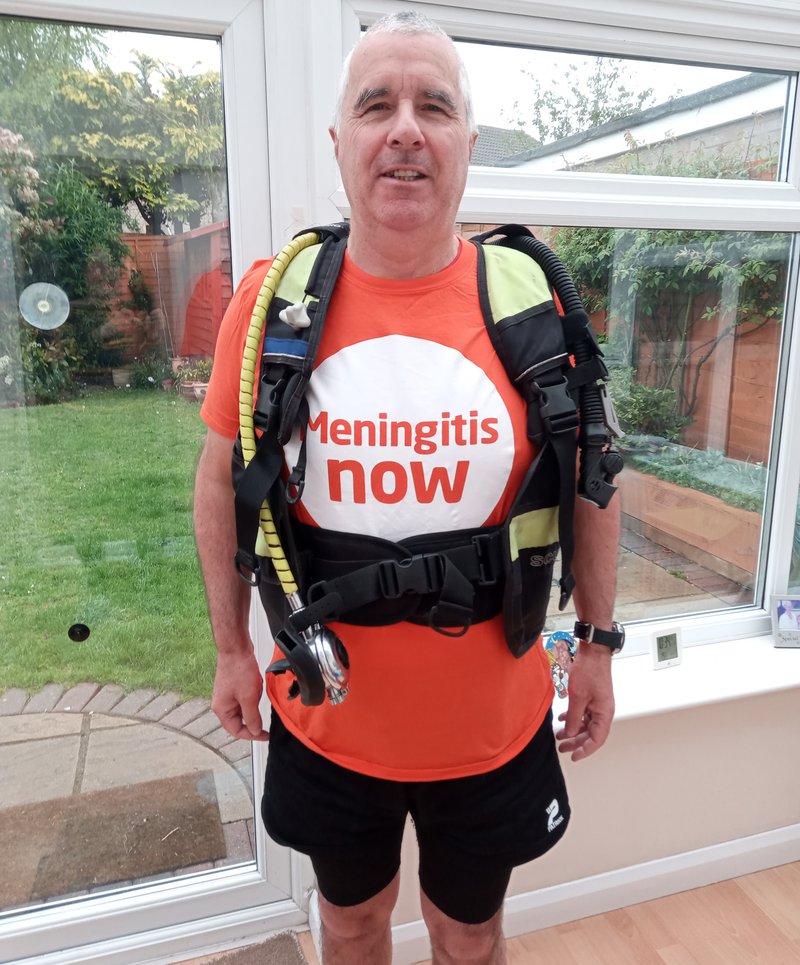 Mark added: “I have to thank my local Cotswold store for their advice on running kit and nutrition, and my wife Carol for all her encouragement.”

So, if you’re in the Southampton area on Sunday 5 September why not pop along and cheer Mark on. He’ll be decked out in one of our Team Tangerine Meningitis Now orange T-shirts, with the balloons and scuba gear. If you’re particularly eagle eyed and that doesn’t help you spot him keep your eyes peeled for bib number 6135.

And if you’d like to support his efforts you can do so on his Just Giving page here – https://www.justgiving.com/fundraising/mark-boyd5.

Many thanks for your support Mark and good luck for the Southampton Half Marathon – we look forward to hearing how it goes when you can come up for air.