“When I awoke from my three-month coma, I had no idea what had happened.

“I had gone into Chelsea and Westminster Hospital with a bad headache and fever in August 2011. When I opened my eyes, I was completely paralysed from the neck down.

“If you’d have told me that I’d have a near-fatal case of meningitis, I would never have believed you. Thankfully, I’m alive to tell my story.

“I’m originally from Mogadishu in Somalia, but because of the civil war, my family and I moved to Mombasa when I was a child.

“I came to the UK in the early 2000s. Lucky for me, I could speak English so I went to school and integration wasn’t hard for me. After I left school, I went to work.

“I now live in West London with my husband and young son.

“On that fateful day in August 2011, I started getting a headache but I didn’t think too much of it.

“Over the course of the day, I felt my neck stiffen and I also developed a very high fever. By this point, my headache was very bad so I spoke to my neighbour about it because my husband was at work at the time.

“My neighbour is the one who called the ambulance. I can remember speaking to the doctor and telling him how I was feeling, but my memory is blurry after that because of the headache.

“From that moment on, I don’t recall anything until I woke up three months later from the coma. During this time, I died clinically three times, but was resuscitated.

“When I woke up, I was told that I had suffered a near-fatal case of meningitis – an infection that causes swelling around the brain and spinal cord.

“I was confused. I had only gone into hospital for a headache, and now I was being told that I would be in a wheelchair for the rest of my life.

“I also felt scared because the doctor told me that I was the only spinal cord injured person in the hospital. I was worried that the facilities were not equipped to deal with my needs. 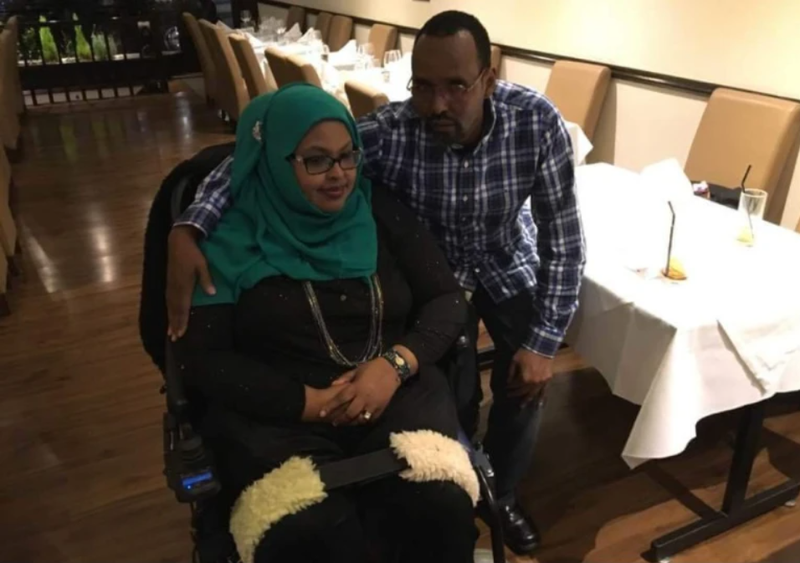 “That was when Simon from the Spinal Injuries Association (SIA) first came into my ward in his wheelchair and I thought: ‘Thank God, I am not the only one’. Simon made me feel like I belonged somewhere and that there is help out there. I could get support and supplies through SIA – be it mental health or advice about anything that I had concerns for – and they had someone who could help or direct you to the right place or person.

“At that moment, I made a decision and I told the doctor that I had two goals. In the short term, I wanted to get back to my family and do whatever I could to continue to be the best wife and mother that I could be. In the long term, I wanted to one day wear a pair of high-heeled shoes again.

“I stayed at Chelsea and Westminster for eight months and it was a challenging time getting used to my new life.

“Once I was stable enough, I was transferred to the specialist Spinal Injuries Unit at Stoke Mandeville hospital, where I began my rehab process over a period of six months. By this stage, nothing across my body moved for me at all, so I had to learn a lot.

“The rehab process included hours and hours of exercises, pushing myself to move that little bit further each time. Family, faith, and the thought of one day slipping some high heels back on, gave me the motivation I needed to persevere. I left Stoke Mandeville Hospital with very minimal hand movements.

“With some additional physiotherapy at my new adapted home, I managed to gain some limited control over my arms once more, giving me a greater sense of independence. Today, I still use a hoist for transfer, though I am currently learning how to transfer independently. I can use my hands too, although I still need a lot of exercise to continue strengthening my upper body.

“After my injury, I could no longer wear any of my old clothes. I quickly realised that when it came to fashion, people in wheelchairs were an afterthought.

“I have always loved fashion. I am a very proud Somali woman and my wardrobe has always reflected that – in my home country, we love bright, bold colours that are full of life. I used to love wearing my traditional clothing – like a kimono robe and abaya – but I also wore jeans, which I definitely can’t do now.

“But after my injury, there were no fashionable clothes that I could easily take on or off due to my limited movement – even with an assistant to help. When I did eventually find some garments that I could wear, they were tight and loose in all the wrong places due to my seated position.

“I wasn’t going to let that stand in my way. One day in 2017, I asked my late mother ‘why can’t they make something for us?’ and she told me that if I wanted to make a change, it had to start with me.

“And that was that.

“Not long after, a friend put me in touch with Oxford Fashion Studio and, after some back and forth, ‘Faduma’s Fellowship’ was set up in my name for aspiring fashion designers to establish a new collection created specifically for wheelchair users.

“I would be the one running a competition with a panel to help me with the selection of a winner. I was so happy.

“There were six shortlisted entrants and Harriet Eccleston – a young designer who launched her own fashion brand in 2019 – was chosen as the winner. We started work on co-designing the first fashion range specifically for wheelchair users to be showcased at London Fashion Week.

“We didn’t want the designs to be simply functional, we wanted them to be fashionable, so we came up with practical but stylish dresses, trousers and tops.

“In September 2021, I attended London Fashion Week to see the collection and it was an amazing feeling to see it on a show like that. The cheer from the crowd was amazing! I have never been so proud of myself seeing six disabled women in wheelchairs rolling down that catwalk.

Not defined by my wheelchair

“I hope that anybody who looks at me now does not define me by my wheelchair. I am an entrepreneur, I co-designed my own revolutionary accessible range, and I am an advocate for the spinal cord injury community.

“I also campaign for the Somali disabled community through a new charitable organisation, Let’s Make Some Noise, which is a group of people from different backgrounds who have come together in order to educate the Somali community about disability.

“I do not want to dwell on my situation. I want to use it to empower others to embrace their disability and not feel defined by it.

“I still face mountains when I go outside my door each day. I can’t go to the salon, most restaurants or to the cinema because they aren’t accessible. I even struggle with roads and paths that aren’t suited to my chair.

“But I won’t let that stop me from living a fulfilled life and supporting my family – not to mention helping other disabled people do the same.”