Fleur-Rose passed away after a brief fight with meningitis, just days after she started walking for the first time.

Lizzie Allen, from Shropshire, overcame 16 miscarriages to give birth to her daughter earlier this year - only to lose her to meningitis.

When Fleur-Rose was only 15-months-old she woke crying with a slight temperature. Her mother, Lizzie, thought she had a bug and gave her water and Calpol but just hours later, after suffering four cardiac arrests, doctors declared her dead.

Rushed to hospital in an ambulance, Fleur-Rose's temperature was measured at 39°C – indicating a high fever. She was drifting in and out of consciousness - but on the way to hospital her fits had stopped. Upon arriving at hospital, Fleur-Rose even appeared to perk up as she started playing with toys.

Around lunchtime she began retching, but her oxygen levels were still 100 per cent, doctors said. At 1pm she had an X-ray on her chest, which was clear, but she still was not eating. 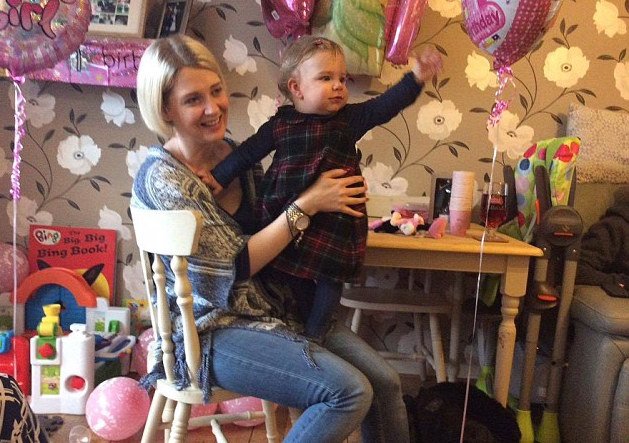 Ms Allen said she appeared healthy as she was smiling while sitting on her father's lap. When feeding her a spoonful of mashed potato, the family noticed a slight red blotch on her neck. They shouted for a nurse but moments later the mark had gone.  At 5.30pm Fleur-Rose was admitted to a side room as doctors attempted to get a water sample from her. They then revealed they were going to give her an antibiotic to treat meningitis.

"She deteriorated before our eyes."

At 11.04pm, the family were told there was nothing more that could be done to save her.

Her family now wants to promote greater awareness of the signs and symptoms. "People always look for the rash, but her rash didn't develop until later."

"At lunchtime she was cheerful, but actually she was being killed from the inside out. She was too young to articulate how she felt. She couldn't say, "Mummy my eyes hurt or Mummy I have a bad tummy. I think every child who is admitted to hospital with similar symptoms should automatically have a meningitis check" Since Fleur-Rose's death, Ms Allen has raised £12,000 for Meningitis Now in her daughter's name.

"I want people to remember her," she said. "I had 16 unexplained miscarriages in six years before she was born. Time after time, I experienced heartbreak. Then, finally, she was there."