We do not door-to-door fundraise!

Trading standards have today informed us that that people or persons in the Selby Yorkshire, are carrying out door-to-door fundraising, apparently, on behalf of Meningitis Trust, the name by which we were known.  It appears that these people are using a forged card or letter of authority to legitimise their actions.

It is really important to stress that we do not carry out door-to-door fundraising and that these people neither represent this charity nor do they have our authority to fundraise for us.

Trading standards have advised that people receiving such visits should not make a donation and immediately report the incident to their local police.

“The actions of these people is both illegal and morally very wrong.  Not only does this type of scam impact on the reputation of the many of decent people who freely give their time to raise funds for us in well organised and approved events, it also robs us of funds to provide the lifesaving information advice to at-risk groups and support to people who need it most – those who have suffered the consequences of meningitis”.

A team of Meningitis Now supporters, staff and volunteers hosted a parliamentary reception.

Young Ambassadors Jemma Pressman and Charlotte Hannibal,  met with MPs this week and told them of their meningitis experience, whilst calling on them help protect more young people, like them, from the growing threat of Men W.

A core part of our reception was to ask MPs to support in helping to increase the number of 17 and 18 year olds in England, Wales and Northern Ireland getting the lifesaving Meningococcal ACWY (Men ACWY) meningitis vaccine, which currently stands at just 17%.

In their speeches, Jemma and Charlotte asked MPs to write to GPs and universities in their constituencies, asking them to make better use of the wide range of free materials we have to raise awareness amongst this at-risk group.

Over 45 MPs crammed into a full Westminster briefing room to hear speeches which, in addition to those of the Young Ambassadors, included presentations from Heidi Alexander MP, Sky News regular and GP, Dr Ellie Cannon and Meningitis Now CEO Liz Brown who commented on the event:

“This was a moving and compelling event made very special by the stories of Jemma and Charlotte.  Many MPs commented saying how the personal experiences of those who have suffered meningitis will motivate then to do something positive.”

MPs from across the UK signed a pledge board and committed to raising the profile of the campaign in their constituency. In the coming months the charity will be building on these pledges and doing everything we can to ensure more young people receive the lifesaving Men ACWY vaccine. 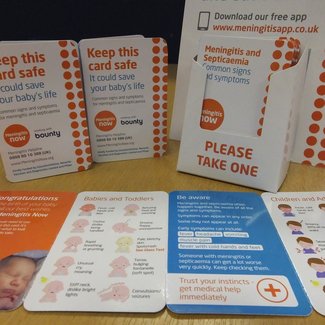 Meningitis and septicaemia can kill within hours. Knowing the signs and symptoms, remaining vigilant and reacting quickly can save lives. Check them now