Now London-based Nick, who has upped his pace and will be running a half marathon this year, is encouraging anyone who fancies a challenging but achievable distance to sign up to the 10k in 2020.

“Don’t be daunted,” he said. “I can honestly say that as long as you follow a good training plan, the hardest thing about it is actually taking the first step and signing up!”

Nick himself is a survivor of meningitis. His story started when he was hospitalised for a week after collapsing in the street in July 2018. Luckily, a stranger he thinks was called Ellen found him and looked after him – an act he believes might have saved his life.

“She called the ambulance and sat with me the whole time keeping me conscious,” he said. “I’ve never managed to find her since then unfortunately. I realise now how important that was”.

After his recovery, Nick said his re-integration into work and normal life was “something I didn’t imagine would be as hard as it was” but this still didn’t stop him signing up to do the London 10,000 as part of #TeamTangerine in May last year.

“I wasn’t a runner at all before I joined the Meningitis Now team,” said Nick – whose full story you can read here.

“But the whole Events team was really supportive and then when you join the Facebook group with all the other runners you realise you are not doing this on your own."

“I really felt like I was part of something even before the event and then on the day it was great to meet others like me who had had a personal experience of meningitis.”

As well as preparing for the run, Nick was busy fundraising – and ended up with an amazing total of £1,557. He said he was lucky that all the money was raised through donations.

“I think it helped that I had a really personal reason for fundraising for Meningitis Now,” he said. “Nevertheless, I know how lucky I am that people were so generous.

“It was amazing that I managed to raise so much – I was getting donations from family and friends I hadn’t heard from for years!” 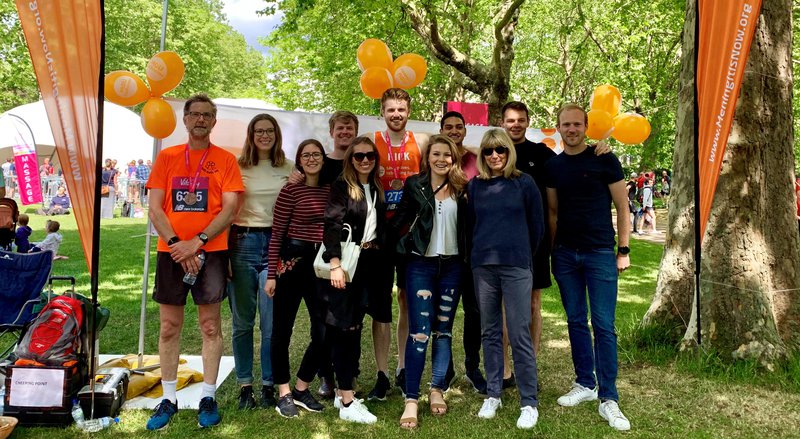 Inspired by his success last year, Nick has now signed up to do another Meningitis Now event – the London Landmarks Half Marathon in March.

“I got lost one day while training for the 10k and ended up running more or less the distance of a half marathon,” he said.

“Now of course everyone is asking me whether I’ll do a full marathon next!"

“At the moment I don’t think that’s on the cards, but I didn’t decide to do the half until I had completed the 10k – so never say never!”

If Nick’s story has inspired you to get moving, find out more about the London 10,000 and sign up please visit our event page via the graphic below.