As well as being a top designer the eponymous company is also one of our favourite corporate supporters. They’ve been supporting us now for over 10 years and during that time they have raised over £100,000 through the sale of their Caroline Gardner Christmas cards for Meningitis Now towards our lifesaving and life-changing work.

Caroline’s husband Angus, who works alongside her in the business, explains why they’re so keen to support our work and fight back against meningitis.

“Our youngest son, Sebastian, who is now 17, contracted meningococcal septicaemia when he was 18-months-old. One of our other children had been performing at a school assembly and we were heading to work when Sebastian’s nanny called to say he was still not right (he had woken feeling unwell and grouchy) and thought we should take him to the GP."

“We met her at our local GP’s surgery and were seen very quickly. Sebastian had a slight rash, but also a strange bruising on his chest, and although the doctor didn’t think it was anything sinister, suggested we go to A&E in Kingston upon Thames.”

“We went straight there and joined what was a very busy queue. Unfortunately we sat waiting for two hours, during which time Sebastian vomited and began to deteriorate.”

“When we were eventually seen, the triage nurse at first didn’t seem to think there was too much to worry about. She asked us whether we had accidentally pinched Sebastian’s skin when putting him in his car seat.”

“Luckily, whilst we were examining the bruising further, a paediatric registrar walked past and spotted Sebastian’s symptoms. Recognising them for what they were, the bruise was a sign that septicaemia had set in, Sebastian was rushed quickly to another part of A&E and hooked up to a drip.”

“What happened after this was a bit of a blur, but he began to slip into a coma and we were advised to say good bye to him. Another paediatrician was called. Fortunately she had just come to Kingston having spent a year in Birmingham, where there was a meningitis centre of excellence. Seeing the severity of his case, she controversially doubled the dose of antibiotic in the IV.“

“After a few hours Sebastian was moved into ICU and monitored. The St Mary’s Paddington crash team, who again have a meningitis specialist group, were called that night as unfortunately he was deteriorating. When they arrived they decided to leave him in Kingston rather than making him endure the transfer.”

Sleeping on the floor

“Over the following few days we took it in turns to sleep on the floor next to Sebastian’s bed in ICU whilst he gradually recovered and he was eventually well enough to return home.  The rest of the family were given a course of antibiotics to kill any associated bacteria that we may have been carrying. Sebastian has been left with hearing loss which he copes with very well, but is otherwise a normal bright and chirpy 17-year-old boy.“

“Looking back at Sebastian’s traumatic illness, we both realised how lucky we had been that a well-informed medical professional had recognised his symptoms and another one was on hand who had by chance been trained to deal with the disease.“

“We also realised that there were a number of people who had seen Sebastian during the course of his diagnosis, who hadn’t spotted his symptoms. We wanted to help in the education of both the medical staff and members of the general public and looked around for a charity that was focused on raising awareness of meningitis and its symptoms, as well as offering support to people who had been affected by it.“

How we support Meningitis Now

“Our Christmas cards are sold in about 4,000 shops around the UK, including John Lewis, and by including information about Meningitis Now in every pack of cards sold, we felt we would be helping to build the awareness both of the charity and its work as well as the disease itself.“

“At the same time, we are absolutely delighted that the sale of the cards has raised in excess of £100,000 so far for the charity to use in its campaigns and support of families affected by this horrible disease.” 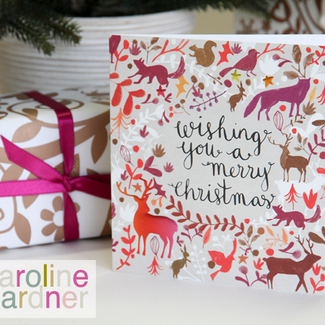