A rugby-mad dad from Balsall Common is urging Wasps supporters to join him in celebrating his late little boy’s life by donating to a fundraising drive in his memory.

Barney Adlington passed away suddenly at just three-and-a-half years of age, less than 12 hours after complaining of a headache, which turned out to be meningitis.

Wasps’ Gallagher Premiership clash with Gloucester at Ricoh Arena on Saturday 7 March is near the 15th anniversary of Barney’s death, and to mark this, his dad Rod Adlington is leading a team of volunteers on matchday to raise funds for the charity, Meningitis Now, whilst driving awareness of the disease’s symptoms.

Meningitis Now is the only charity dedicated to fighting the disease in the UK, and relies on three million pounds’ worth of donations every year to continue funding research into the disease, supporting those with meningitis, and driving awareness of meningitis symptoms.

Rod, who is a trustee for Meningitis Now, is also giving a half time speech about Barney’s story, and the gruelling fundraising challenge that his close friend Duncan Nealon is preparing for, which will see Duncan trying to beat the world record of running the London Marathon in 3 hours and 14 minutes in a full rugby kit and carrying a rugby ball. 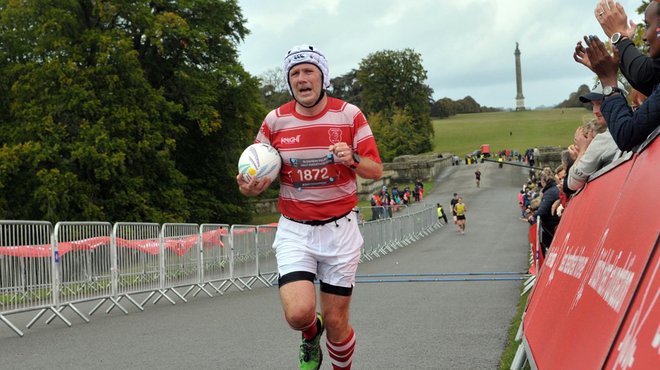 Rod is a board member alongside Duncan at Claverdon RFC, where the two first met 25 years ago and formed a close bond on and off the rugby pitch.

Recalling the darkest period of his family’s life, Rod said, “Barney was taken ill at 11am on a Friday morning in mid-March, complaining of a headache. Two hours later, Anna his mother, took him to the doctor as the symptoms weren't getting any better.

“He was still conscious when he arrived at hospital and we were both holding his hand and consoling him, but also persuading him to stay awake and with us. Unfortunately, he slipped into unconsciousness soon after.

“At about 12.30am we were awoken by a flurry of activity around the bed and now the mood was very different. Not panic, but clearly real concern and anxiety.

“We were sent for a brain scan with Barney, and as we entered the lift, I looked back to see the doctor head in hands - he didn't know I had seen this - and then the dreadful realisation began to dawn on me. This wasn't going to have a good ending; however many scans we had, this was the end.

“It is a blur, but I remember arriving back down in the lift with Barney and having the awful conversation with the medical staff about what happens next. He was removed from life support but had already passed away.

“We dragged ourselves into a local hotel for what was left of the night, and upon returning in the morning found Barney tucked up in bed in a side room with his teddy, looking so peaceful.

“We found the Meningitis Trust soon after – now known as Meningitis Now - and have worked with the charity since 2005. We started with their counselling services and then started holding large barn dances called Barney's Bash to raise money for the charity.

“We are constantly looking for novel ways to raise awareness and money for the charity – and we are thankful to Wasps for opening up a new platform where we can share Barney’s story, as well as Duncan’s big fundraising challenge in London.”

We hope to see you there.