Seema, who presents the Premier League’s global football coverage, the BBC’s World Snooker Championship and various football coverage for ITV, was just 16 when she contracted bacterial meningitis which left her in a serious condition in hospital.

Now, as GCSEs finish and young people prepare for the next stage in their lives, Seema wants to use her story as a way to encourage parents to check that their school-aged children are protected.

“At the age of 16 I was in my first year of College studying P.E, Sociology, Biology and English A-Level.  When I wasn’t studying you would either find me on the tennis court, playing netball or at my favourite dance class. I remember life being so busy trying to fit in studying; sport as well as socialising was a task!"

“One thing that I never compromised on was time for sport - it had a huge place in my life. At the time I also managed to fit in a part-time job on a Saturday as I was focused on saving for my gap year abroad."

“It was one particular Saturday that I remember like it was yesterday - this was the day that meningitis struck. I was working away, chatting to customers, serving coffees and looking forward to finishing work so I could go and check out the latest clothes in Topshop - my standard Saturday routine!"

“This time it was a bit different. I developed a headache throughout the day, one of those headaches that you just can’t shake. By the time I was due to end my shift it was pretty bad and I was really eager to get home and sleep. I thought I was coming down with a bout of flu so took a couple of painkillers and thought I would sleep it off."

“I got home at around 7pm and lay on the sofa, head still pounding. I was unable to sleep. I was very rarely unwell so I was frustrated more than anything that I wasn’t feeling myself. My mum was concerned but I assured her I was fine."

“Fast forward a few hours and I was in bed. My mum came into my room to check on me and turned on the light in the hall way. As the light crept into my room I couldn’t bear the light, which was very strange. At about 2am my mum called the night doctor straight away, who arrived within 15 minutes. After examination, he reassured us that this was just flu. I was given further painkillers to help with the headache and off he went."

“An hour later I was sick, my neck started to hurt and it was at this point that I started to lose consciousness."

“As you can imagine, my mum was terrified. From the symptoms I was having she knew straight away that it was meningitis. She called an ambulance immediately."

“The paramedics arrived and after taking one look at me decided that I had taken drugs. I cannot recall this part but my mum does. They apparently dragged me to the ambulance - they had little sympathy, thinking this was yet another teenager reacting to drug abuse, something they had probably seen a thousand times before."

“By the time we reached the hospital it was 6am and I had fallen into a coma."

“The next thing I recall was at around 4pm the same afternoon. I woke up in the middle of the lumbar puncture which was both frightening and painful. As I slowly came around I became aware of what had happened and was told that I was extremely fortunate to come through the illness unscathed. I had contracted bacterial meningitis strain B. They caught it just before it turned to septicaemia."

“I was in the brilliant hands of the doctors and nurses at Kingston hospital, where I stayed for 10 days. I recovered fairly quickly but the doctors told me that if it wasn’t for the fact I was extremely sporty the outcome could have been very different."

Back to full strength

“The wider impact was that I was just due to take my exams - so I had to take both sets of exams the following year at the same time. My gap year couldn’t come soon enough!"

“This was a huge reminder of just how easy it is to take our health for granted and although there is nothing that I could have done to prevent it I count myself extremely lucky to have not suffered from any lasting after-effects."

“Where I grew up we had a neighbour who lived directly opposite me, a familiar face I would see come and go as he went about his daily life. He was blind and walked with a limp and I had often wondered what had happened to him. Ironically, I later found out that he had suffered from meningitis. A constant reminder of just how fortunate I was to still be fully fit and healthy."

“Fast forward a few more years and here I am, enjoying my job in the media as a TV presenter, presenting the very thing that I believed saved me - sport! I have always wanted to support a charity that means something to me and use my profile to make a difference to a cause that is close to my heart - this is more than that."

“I called my mum and dad to remind me of exactly what had happened when we got to the hospital and to fill in a few gaps so I could best relay my experience to you. My mum remembered the exact timings and my dad remembered that “It was the third Monday in April”! Both recalled what a frightening and traumatic experience as parents they endured."

“Now, nearly twenty years after I fell ill, I want to use this opportunity to remind parents to check that their children have been vaccinated and do everything they can to protect them against this awful disease. It’ll be worth it if it means even one young person avoids contracting meningitis.” 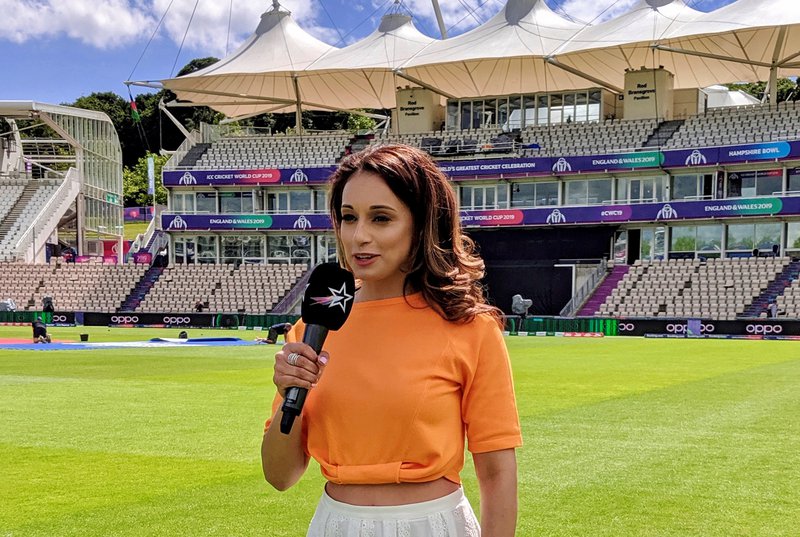 Teenagers and young people are one of the most at-risk groups of contracting meningitis. Read about our Students and Young People Campaign for more information.