Steve will be walking from Morpeth in Northumbria to Stonehouse in Gloucestershire, visiting towns along the way whose initial letters spell out the word meningitis.

He hopes to raise £50,000 during the 17-day walk for Meningitis Now, to take his personal contribution to fighting the disease over the last 30 years to £2 million from walks alone.

Steve’s epic journey starts in Morpeth on Saturday 8 October. He then walks via Easington, Northallerton, Ilkley, Nelson, Glossop, Ibstock, Tamworth and Inkberrow, covering about 20 miles each day, before the final leg brings him to Stonehouse, in Gloucestershire, on Monday 24 October.

There, supporters will be on hand to greet him back to the town where the charity started, following an outbreak of the disease in 1986.

Involved for over 33 years

“I’ve been involved with the meningitis movement for over 33 years, since losing my 14-month-old son Spencer in 1982 to meningococcal meningitis,” Steve said.

“There were no organisations to represent the disease then, so I’ve dedicated my life to help create a better understanding of the disease.”

Steve became the founding chairman of the Meningitis Trust, now Meningitis Now, in 1986.

“We were the first charity to address this awful disease,” he added, “and since then we have funded over £12 million of preventative research, distributed over 20 million awareness symptoms cards, taken over one million helpline calls and supported thousands of families who lives have been devastated by meningitis.”

Despite the great strides in prevention and awareness bought about by the charity’s work meningitis remains a threat and thousands of people continue to live their lives with its devastating consequences, Meningitis Now are also equally committed to investing in life-saving and life-changing research every year.

Committed to the fight against meningitis

As we enter our 30th anniversary year we remain committed to the fight against meningitis and to achieve our vision, where no one in the UK loses their life to the disease and everyone affected gets the support they need to rebuild their lives.

It will be veteran long-distance walker Steve’s 33rd walk. He will be walking the route with support from a small back-up team of Phil and Judith Cook and Bob Birstall and collecting donations throughout. Local supporters are welcome to join him at the finish of each day’s walk.

“It would be lovely if any schools that I pass would come out and give me a bit of encouragement and cheer me on,” he said, “and I’ll be happy to return another time to give an assembly. But, because of the distance I need to cover each day I won’t be able to stop anywhere for a visit during the walk.” 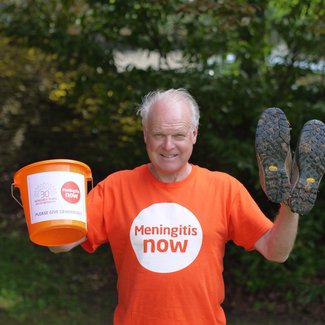 Support Steve on his walk

Supporting families who lives have been devastated by meningitis