The running and cycling enthusiast had previously taken part in our much loved annual event, and after completing the route by lunch time, decided to embark on the journey for a second time.

“Have you ever wondered what you would do one Saturday morning? Let’s go for a little jog as one might say. Well this little jog turned into a bit of a marathon on more of a mammoth scale.”

“At the time I lived in Bisley and was taking part in the Five Valleys Walk, which I had also completed in a previous year. I had thoroughly enjoyed the cross country route passing through the most picturesque of the Stroud valleys and the hill climb is a good work out for stamina building.”

“It was a nice run though the valley from Bisley to Eastcombe, where I recall a bus was parked at the village green and from here I started my walk. Having already ran this far, I continued to run and run and run…”

“By 1pm I was back at Eastcombe having done my loop and at this time Michelle from Eastenders had just reached Eastcombe (I must confess I have never watched Eastenders, however the support of high profile celebrities is always good for any charity).”

“I now had a bit of a dilemma: I had just ran some 25 miles that morning, so what should I do now?”

Steven contemplated finishing his run and returning back home to Bisley, but after thoroughly enjoying his morning, he decided to retrace his steps through the five valleys once more.

“I thought, maybe I should just run back home to Bisley, but what next? I have a bright idea…..let’s run around again! So off I went, back towards Lypiatt passing some of the people I had seen previously, both on the walk and at the checkpoints.”

“By the time I had reached Nailsworth, I was starting to tire. I had the climb up the hill and over the common, but then I was met by the nice recovery period on the downhill section to Brimscombe. It was then a hard struggle up the Toadsmoor Valley and back to Eastcombe for 6pm.”

“By this time the bus had already left and I was on my own feeling shattered having ran around twice and covered some 48 miles, the most I had ever ran in a single day. Two elderly ladies, who had just finished at Eastcombe, took pity on me and drove me back to Bisley which I very much appreciated.”

“Later that evening I recall going to a youth church service in Gloucester, though I was totally shattered and unable to walk much or really participate – I wonder why!”

“I must admit that I recall this day with fond memories. The Meningitis Now walk brings out the best of Stroud’s valleys and I would certainly highly recommend to any that have yet to give it a go, to please sign up. And if you find you get around the route quicker than expected, you can always go around again and again and again….”

“Steven’s story is incredible – to run the route twice in just one day is inspiring!”

“Many of our supporters come back year-on-year to take on the Five Valleys – it’s an event loved by so many and something everyone at Meningitis Now looks forward to every year. The great thing is that participants can choose how much of the route they want to complete so they can enjoy the day at their own pace, taking in the beautiful views Stroud has to offer.”

“This year we have a really pulled out all the stops, there are some fantastic attractions including bouncy castles, a nature trail, Gifford’s Circus, live music and a number of great refreshment options.”

Registration for this year’s event is now open. Walkers signing up in advance pay just £10 per adult and £5 per child, aged 16 or under. Under 4s go free.

Find out more about this year’s Five Valleys Walk 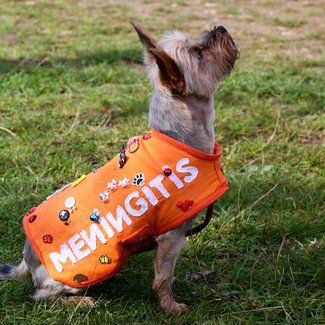