Kevin Ryan, 31, of Kirkby in Liverpool, will be joined by a dozen family members and friends for the challenge to raise awareness of the disease and funds for us.

Kevin and his wife Nicola’s 18-month-old son Leighton was struck down with meningococcal septicaemia in July 2013.

But the battling youngster, now four, has made a good recovery and, along with some of his friends, will join the cyclists for the final mile of the challenge along the Liverpool Pier Head.

“We can’t thank the teams at Ormskirk and Manchester Children’s Hospitals enough for saving our little boy’s life” Kevin said.

“We want to raise money for Meningitis Now to help make people aware of meningitis symptoms and inform them about the after-care and support the charity can provide."

To hospital as quickly as possible

Leighton became ill in July 2013 and the NHS helpline advised his parents to get him to hospital as quickly as possible. He was crying, very clingy and sleepy, not his usual self at all, and was burning and hot to touch but his hands and feet were freezing – all classic symptoms of meningitis.

Leighton seemed to perk up a little when they arrived at Ormskirk Hospital but later collapsed and was moved to a high dependency room. Doctors decided he needed to transfer to Manchester Children’s Hospital, which had better facilities for treating him.

“We were informed that he was seriously ill and to prepare for the worst,” Kevin said. “It was possible he may not make the journey."

“The next 48 hours were critical. We sat by his bed watching his stats, making sure nothing dropped lower than it should. We counted every tube as we watched more fluids, blood platelets and numerous antibiotics and medicines being pumped into his tiny body."

“Within a few days he began to improve. Leighton began looking more like the little boy we knew. We dared to hope!"

Over the moon with progress

“The consultant was over the moon with Leighton's progress and on 5 August he was weaned off his medicines and slowly brought back around from his life support.”

Leighton was then transferred back to Ormskirk Hospital’s High dependency unit.

“They were shocked to see him back” Kevin said. “They too had all thought the worst, but our little fighter had proved everyone wrong, he wasn't going anywhere.”

Kevin hopes to raise £1,000 from the challenge, which takes place on Friday 5 August 2016, leaving Liverpool at 4am and returning to the city the following day at 4pm, covering 254.5 miles in the 36 hours. To support his efforts visit his Justgiving page at http://www.justgiving.com/kevin-ryan2

“It’ll be a long and hard slog to complete this challenge,” Kevin added, “but I’m really looking forward to it and I’m sure we’ll be able to spur each other on."

“However tired we get and tough we find it though we know we face nothing like the struggle Leighton has had to recover from meningitis.”

Christine Hughes, our regional support officer in the north west, said: “We’d like to thank Kevin and his friends for their wonderful fundraising efforts. We rely on the energy, enthusiasm and initiative of him and those like him to raise the funds we need each and every day to continue our vital research, awareness and support work."

“Events like this make a real difference to those who are at risk from meningitis and those whose lives have already been changed forever because of it.”

Our photo shows Kevin (right) with Leighton and David Jones, Leighton’s grandad, after a training ride of 24 miles along the canal from Melling to Liverpool and back. 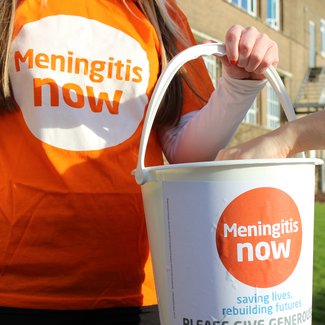