Why did you decide to run in the Paris Marathon 2015?

My husband had convinced me to enter the ballot for a place in the Paris Marathon. He had previously run in the London Marathon and he wanted us to experience a similar event together. I agreed to it thinking that I wouldn't get a place! It was a complete shock to get that email through to say we both got in.

What inspires you about the work of Meningitis Now?

In order to focus our training we opted to run the event for Charity. Chris previously ran the London Marathon to raise funds for Meningitis. Our nephew Caspar had contracted the disease. Although it was touch and go, Caspar survived but he was left with some hearing loss. At the London Marathon, Chris met some inspirational individuals. Alan Glynn was one such individual. He had lost his daughter, Alexis Rose to Meningitis and had tirelessly campaigned to raise awareness of the awful disease. We decided that we would therefore run to raise funds for Meningitis Now but also run in memory of Alexis Rose.

What were your experiences / highlights of the Paris Marathon?

It was the first time that I had ever been to Paris so it we treated it as a romantic weekend break! With 2 sons, aged 10 and 7 - it was our first weekend away together in nearly 9 years. It was a bit extreme to run 26 miles to get that time together but it was worth it. We managed to fit in all the sightseeing around the event and seeing the Eiffel Tower illuminated in the evening was magical. The event was well organised. The support was great, bands lined the route. We met some lovely people and heard some great stories from other runners. I have to admit that the best part was getting over that finish line, the sense of achievement and being able to show my sons the lovely medal!

Did you come across any barriers on your journey? If so, how did you overcome them?

The training was physically and mentally challenging. I had never run further than a half marathon before and the last one I ran was in 2010 so it was a giant leap for me. I set up a training plan and stuck to it religiously. I was training 4 times a week. It was actually the shorter runs that I found the most difficult at times. I was often tempted not to do them, trying to convince myself it wouldn't matter. I would then force myself to do it and once ran with tears in my eyes. However, I had amazing support. I logged all my runs on Facebook and shared those moments when I was finding it difficult and people were just so supportive. Alan Glynn was always there with a supportive message and the thought of running in memory of his little girl really pulled me through. Running for Meningitis Now really gave me the kick up the backside to keep going. I followed their FB page, read all the stories and kept inspired as to why I was doing it.

What would you say to someone else thinking of taking on Paris Marathon in aid of Meningitis Now?

I would highly recommend the Paris Marathon. I won't lie and say I found it easy but Chris and I had an absolutely amazing weekend. The whole experience will stay with me for the rest of my life. I finished it in a respectable 4 hours and 11 minutes. Not bad for a first attempt and I sustained a leg injury at 17 miles too. Not once did I think of pulling out of it though and I love being able to say that I am a marathon runner! 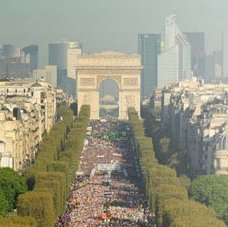 Voted as one of the Top 10 Marathons to do before you die, this fabulous route is a sight-seeing tour on foot! Runners pass some of the cities most famous landmarks, including the Eiffel Tower and Notre Dame Sign up now