Team Alexis Rose was put together by Perth father of four Alan Glynn and his wife Ruth following the death of their 19-month-old daughter Alexis Rose in February 2011. This year marks the 10th anniversary of her death, and today, 15 July, would have been her 12th birthday.

The team now comprises 38 members, from Scotland, England and even as far afield as Australia. To mark the anniversary they have set themselves the task of completing a virtual John O’Groats to Land’s End challenge.

With the distance between the tip of Scotland and the toe of England being 1,083 miles that’s a massive 40,071 miles they’ve pledged to complete.

These people are amazing

But the distance holds no fears for this amazing group of people, who over the last ten years have pretty well completed the catalogue of fundraising challenges to fight back against the disease and raise awareness.

Along the way they have organised or taken part in dinners, discos and quizzes; hill climbing and Mount Everest base camp; Three Peak and Eight Peak challenges and Lake District and Ben Nevis walks; football tournaments; fun days and bake sales; bike rides; and marathons, half marathons , 10k and 5k races in this country and in China, Dubai, Australia, South Africa and France – phew! And that’s not to mention the Full Monty fundraiser.

“This team; these people are amazing,” Alan said. ‘They’re the ones who make it possible and who have achieved so much. Their energy, effort and dedication they bring to the fight against meningitis is just incredible and it’s an honour for me to be associated with them.

“Over the years there’s not been a challenge they haven’t smashed and I know this latest John O’Groats to Land’s End Challenge will be a big success for the team too.” 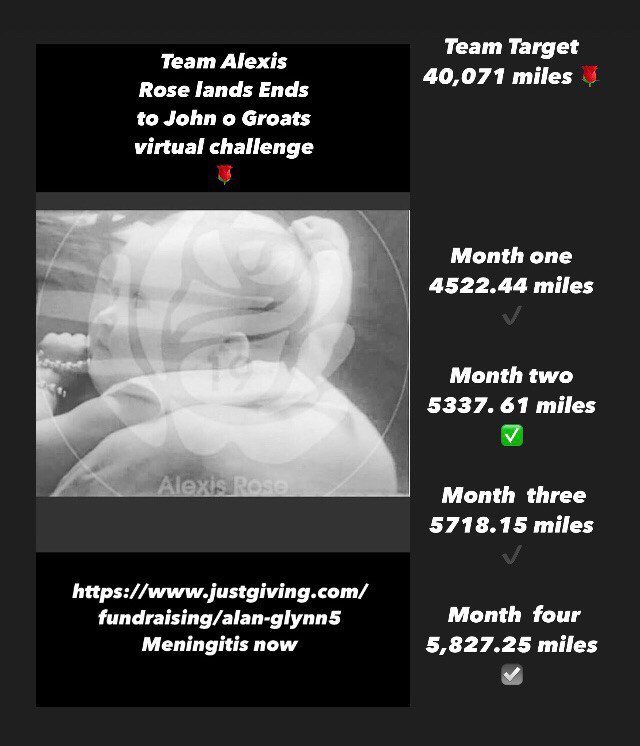 Reflecting this strong belief in the power of ‘the team’ a Forever Fund set up for Alexis Rose has recently been renamed ‘The Meningitis Family Forever Fund'. It currently stands at £114,000.

Alan explained: “I made the decision to change the name of Alexis’s fund to the Meningitis Family Forever Fund because this is what I think her tribute has become. It has grown in strength by bringing people together and it is this group effort that I am particularly proud of.

“We are united by a common goal, working as a friendly force, a family, to raise awareness of meningitis and funds and we support each other to meet targets.”

Alan added: “These people have all had my back. You always need a team to achieve anything and you’re only as good as the people around you. Friends have given so much back through their energy and enthusiasm following our tragedy and enable Ruth and I to keep our daughter’s spirit alive.”

Our Executive Founder, Steve Dayman, commented: “This team response demonstrates the way meningitis doesn’t just impact the individual and their immediate family but sends shockwaves through networks of friends and devastates whole communities.

“The Team Alexis Rose members have achieved incredible things over the years and along the way have created a lovely tribute to Alan and Ruth’s much-loved daughter.

“They are a powerful force bringing about positive change in our fight against meningitis and I’d like to thank each and every one of them for their efforts and support. Together, through everything they do, we are moving ever closer to achieving our vision – to defeat meningitis in the UK within a generation.”

Over the next few weeks and months we hope to bring you stories of some of the people in Team Alexis Rose and why they are determined to fight back against meningitis.

If you’d like to join the family and support Alan and the team visit the fundraising page at https://www.justgiving.com/fundraising/alan-glynn5 or the Meningitis Family Forever Fund page.