Holly, along with 23 other intrepid Meningitis Now supporters, climbed the three highest summits in the country over an incredible 36-hour period. There was no doubt at all – it was demanding, it was daunting and it was difficult but, said Hollie, it was also hugely rewarding.

And the good news for anyone who fancies taking on such a momentous mountainous challenge is that today we open up to applications for Three Peaks Challenge 2020. So, if reaching the summits of Snowdon, Scafell Pike and Ben Nevis over one weekend sounds like your sort of thing then sign up below!

Holly, from Cambridgeshire, said she had decided to take on the challenge to raise money for Meningitis Now after receiving support from the charity when she contracted bacterial meningitis in 2017.

She realised the 36-hour trial would be hard work but also described the elation of taking part:

“To say this was one of the hardest things I’ve ever put myself through would be an understatement, especially because I didn’t have the same strength I did have before I became poorly,” she said.

“But the safety team and the rest of the team were so compassionate and supportive, and it really was one of the best weekends of my life. I’ve met the best of friends and I’ve never met a charity that have been so lovely and made everyone feel like such a family. After meeting so many great people this weekend and sharing stories of loved ones and friends who have been affected by meningitis, for the first time in a very long time I didn’t feel like I was on my own with it all."

“I met a gentleman this weekend on the coach called Paul who sadly lost his daughter Izzy only a few months before I contracted the same form of bacterial meningitis and our stories were so similar. It touched me so much and made me realise just how lucky I am after coming so close to not being here today. Paul was an inspiration and he pushed me to do the best I could have done. I would recommend anyone who has had meningitis or been affected to come along & join the Meningitis Now family. You won’t be disappointed!”

Holly also talked about how impressed she was with the way the event was run:

“Everything was so well organised by Meningitis Now from the lunch packs, pick up times, the hotel and facilities on our last night, it was all fantastic!” she said.

“The safety team really did look after me and everyone else, putting everyone’s safety first all the time. The knowledge was brilliant and the CEO of Meningitis Now, Tom, even came long for the weekend, climbed a couple of the mountains and made me so very yummy (cold) porridge ha ha! Again, everyone is so down to earth and genuine. I love my Meningitis Now family.”

Holly said she decided to raise money for Meningitis Now because the charity had been so “patient, understanding and attentive” after she fell ill. “Meningitis Now helps others just like me every day get their confidence and their lives back,” she said.

“I love talking about this disease to others …I know that making people aware could one day save a life!”

Meningitis Now Events Fundraiser Michaela Ifill said the Three Peaks challenge was no mean feat – but was definitely one that you would feel proud to achieve.

“The challenge is tough – it’s a real physical trial,” she said. “But that very toughness makes it an event which brings out a real spirit of camaraderie in the participants who start out as strangers but often end up as close friends. Many of those who take part have a personal meningitis connection and talk about how much they enjoy swapping stories over the course of the weekend."

“But in the end, it’s the sheer triumph of reaching the three peaks over such a short period of time that sticks with most people. If you don’t believe me when I say it’s one of the best feelings in the world then come along next year and try it yourself!” 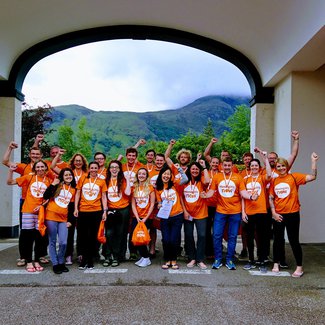 It’s a fantastic opportunity to make new friends, enjoy some of the finest scenery in the UK and, of course, raise money to help us save lives and rebuild futures. Sign up here