Kerry and Russ Fisher, of Uttoxeter, will walk The Manifold Way in the Staffordshire Moorlands on Saturday 26 September – the day before our own Five Valleys Walk. This is an invitation to join them.

Their walk starts at 9.30am from the Hulme End visitor centre at the northern end of the route, with stops at Wetton Mill and Waterhouses. So far, around 40 of their family and friends are taking on the challenge with them and anyone else who wants to take part is invited to join in. Those doing so can cycle or walk and do as much or as little of the route as they feel like doing.

For those who don’t know it, The Manifold Way is a multi-user route along the Manifold Valley following the former Leek and Manifold Light Railway through the attractive Staffordshire Moorlands. This trail is an easy route being on a tarmacadam track and minor roads between Waterhouses and Hulme End.

The route has been open since the 1930s when the railway closed, and is probably the earliest case of a disused railway line being converted to a walkers' and cyclists' route.

The path passes through attractive scenery, and indeed tourism was one of the reasons for the original construction of the line. Popular locations along the route include Thor’s Cave, the mill at Wetton Hill and Beeston Tor. A little to the east lies Dovedale, a better-known beauty spot.

Thought she had a cold

Rubie was like any other baby finding her way in the world when she developed what was thought to be a cold.

“She was very quiet and slow in feeding on Wednesday 20th May, but was still okay in herself. We took her to the doctors at 9:30am the next morning and they diagnosed that she was suffering from a cold. But during the night Rubie’s condition deteriorated and she was taken to hospital, where, sadly, she died that morning."

To make a donation in her memory visit justgiving.com/rubiejane 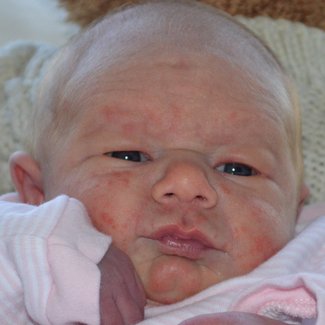