Meningitis played on my mind for a while after that and I started looking into it more.

When I saw that there would be a team in the Great North Run 2016 I jumped at the opportunity and filled in the forms. A few weeks later I heard I got accepted. #fantastic. I was made up and excited. Not only did I want to run on behalf of Meningitis Now but I also wanted to give something back, so I joined up to become a volunteer.

Within a few weeks of receiving my fundraising package I signed up to do a 5k Santa Run but I added a twist to it.... I was dressed in a Santa outfit with a Meningitis Now T-shirt with an orange tutu on.

My first volunteering event took place 169 miles away from home - a rebuilding futures day at Blackpool Zoo. I was very excited but nervous at the same time. The day consisted of crafts and a walk around the zoo, which was educational in many ways - especially in the way how some of the children have adapted and get around living their life as normal as possible. Overall it was a fantastic day and I’m grateful to have been part of it.

I'd like to continue volunteering in the future, whether it be fundraising or helping out at events like the London Marathon or Tough Mudder. 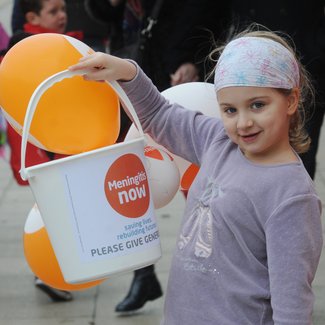 We have a variety of volunteering opportunities available, be it campaigning, fundraising or spreading awareness. View our opportunities