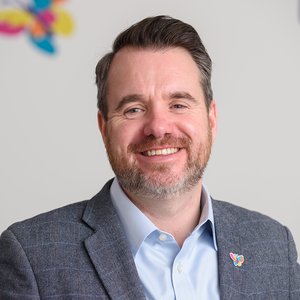 A trained teacher, he was Director of Communications and latterly Interim Chief Executive of the National Childminding Association, before joining Children’s Hospices UK as Director of External Affairs in 2010. Shortly after joining, he helped lead the organisation through a merger to form Together for Short Lives, the UK charity for children’s palliative care.

"I’m delighted and privileged to have been appointed Chair of Trustees for this inspirational charity. Having been a trustee for four years I have seen the extraordinary work Meningitis Now does in prevention and public awareness as well as the support it provides to people affected by this terrible disease."

Andrew contracted viral meningitis as a child and is passionate about the work Meningitis Now does both in trying to eradicate meningitis and supporting those affected by it.

"The charity is in an important phase as it responds to a changing disease, where the impact of hard fought vaccines are reducing case numbers in infants whilst simultaneously highlighting the risk faced by others. The nature of the harm and distress faced by those who have sadly experienced meningitis does not change, however. Along with fellow trustees and our highly motivated staff, I am committed to help and support these people as they rebuild their futures."