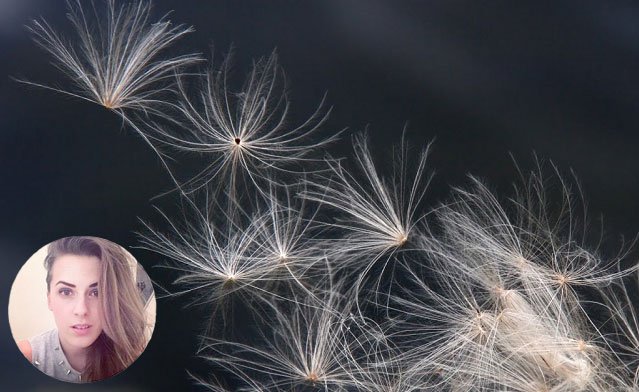 Blogger, Poppy D, shares her experience of losing a friend to meningitis at 18.

It’s always at exactly this time of year that you’ll see fluffy spider-like thistle seeds (at least I think they’re thistle seeds) blowing in the wind. They’re peaceful, aren’t they? And no matter how old you are, it’s really hard to resist trying to catch one as it gracefully bobs past you. They move so slowly it’s like they’re almost suspended in the nothingness, just poodling along doing their own thing, unless of course you catch one and elevate it to genie-like status as you make a wish.

My friend Daniel would always catch them (usually to be annoying and blow them in your face or pretend they’re a massive spider) and after one shift at work when we’d seen a particularly high number of them we nicknamed these silly seeds ‘Daniels’. When they started blowing through the cemetery after his funeral a couple of weeks later, it seemed fitting that they’d made an appearance.

This August marks eleven years since Daniel died. It’s easy to remember the anniversary because the thistle seeds start blowing in the wind. The first one I see always takes my breath away a bit, but from then on they just serve as a gentle reminder of a hilarious young guy who made long Sundays at work easier.

It was a time of my life that I can only describe as bizarre. A few short months before Daniel died, another friend – a mutual friend – had passed away. We’d been to her funeral together and I had led the eulogy, so to then be at his funeral so soon after was like some sort of cruel out-of-body experience.

I was on holiday when it happened and my best friend gave me the news when she picked me up from the station. My family were still in Spain. It was all so sudden and seemed like the kind of thing that perhaps could have been a massive wind-up given Daniel’s character, but I knew that it wasn’t because I’d had this exact harrowing conversation about our other friend a couple of months prior. They are words you don’t forget, especially at 18 years old.

I’d seen Daniel the day before I went on holiday, he’d had a cough that we were nagging him about. A couple of days later meningitis had killed him. There isn’t a long drawn out story, it was a terrifyingly quick escalation despite the fact he was a strong, fit, healthy teenager. He was about to learn to drive.

A couple of weeks after the funeral I started my first term at university, with a framed picture of him on my shelf in my tiny halls bedroom. I probably should have realised it would lead to loads of awkward conversations as these new uni BFFs – ya know, the ones you met five minutes ago – would ask who the gorgeous guy in the picture was.

I wanted to tell them about him though, partly because I didn’t want to just forget he’d ever existed – he was a great guy – but because I wanted people to know that meningitis doesn’t just happen to babies or to people with purple rashes or in TV shows. It wasn’t like I was trying to bring down the Freshers Week party, but I wanted people to know that meningitis is serious and at the age we were at the time, we were prime targets.

Meningococcal group W (Men W) has historically been rare in the UK but since 2009 year-on-year cases of Men W have increased and continue to do so. A particularly aggressive strain of Men W is causing disease in all age groups but there has been a significant increase in university students, so Public Health England are campaigning to all new students under the age of 25 to make sure they’ve had the MenACWY vaccine before heading to university.

The Men ACWY vaccine was introduced across the UK in August 2015 and as the name suggests, it offers protection against the four groups of meningococcal bacteria A, C, W and Y.

Don't wait for a rash

Most importantly, you mustn’t “wait for a rash” before seeking medical treatment. The rash is probably the most famous symptom of meningitis but if someone is ill and getting worse, you need to get medical help immediately.

Early recognition and prompt treatment– especially antibiotics for patients with meningococcal disease –  can be life-saving. You have to trust your instincts and get medical help immediately. The symptoms can be frustratingly similar to flu (and hangovers!) which is why it’s so important to look out for your friends and get help if things seem to be getting worse.

There are FAQs on the vaccine here as well as all sorts of helpful information on the signs and symptoms. There’s also a free helpline for anybody who is looking for answers or support.

And if you are a #cool #young #teen reading this about to go off to uni then have THE BEST time. I am very jealous, it’s a bonkers and fabulous few years. You’re in for a treat!

Hopefully this post doesn’t seem like scaremongering. I know you’d do the same though if you’d been lucky enough to meet him.

Our student awareness week runs from 24 October until 30 October, support us and join the conversation #ACWYnot.