She quickly became drowsy and unable to hold her head up properly. Her mum, Danielle Russell, of Greater Manchester, was concerned so called for urgent medical help. Soon after, a rash began to develop.

“I’ve tried writing the whole story down but it’s too emotional so I’ll try and do this briefly.”

“The 28th December started as a normal day. Bella was fine so I took the kids to town where their dad met us so he could have them for a few hours. At some point whilst he had them, Bella started vomiting.”

“He brought them back to me and Bella seemed fine, just a bit tired. When I got them home, I felt Bella (who was asleep) and she was roasting with cold hands and feet. I checked her temperature and it was 39.9 degrees.”

“I woke her up and she seemed unable to hold herself upright properly and vomited paracetamol up straight away. I rang 111 as I was concerned.”

“As I was waiting to get through, her breathing became rapid. I informed the call handler who quizzed me about her symptoms and told me they would send an ambulance for her breathing and suggested to call 999 if there are any changes. She had no rash at this point.”

Everything happened in just a few hours

“Twenty or so minutes later I went to change her nappy and found three spots, none blanching. I called 999 whilst getting a glass to double check what I thought was correct. After a quick phone call 999 sent a rapid response paramedic.”

“The paramedic administered the dose of antibiotics which probably saved her life. From calling 999 to us being at the hospital was less than 40 minutes and in that time the rash was spreading. A lot of what happened next was a blur but was mostly various medical professionals descending on her getting bloods, putting IVs in and giving her oxygen.”

“Bella struggled with her blood pressure and IVs and we ended up getting transferred to the children’s hospital where she was admitted to ICU. We were in hospital for approximately 10 days - we got sent home then readmitted.”

“Bella had been diagnosed with meningococcal group B meningitis and septicaemia.”

“Everything that happened before she got to hospital happened in only a few hours. Almost every medical professional I spoke to told me it was my rapid thinking that stopped her being even more ill than she was. I got her there in time which prevented limb loss and death.”

“I saw at least five children on ICU who had some form of meningitis. Bella is alive and luckily seems to only have hearing loss. It could have been an awful lot worse.” 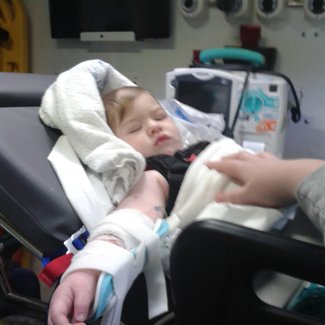 Danielle’s quick thinking saved her daughter’s life. If someone you know is unwell and getting worse, trust your instincts. If you suspect meningitis seek medical help immediately. Do not wait for a rash. Know all the signs and symptoms