What was at first diagnosed as a cold turned out to be pneumococcal meningitis. Despite a gloomy prognosis, 18 months on Charlotte is a bright, stubborn and vocal little girl.

“When my daughter Charlotte was born she was an alert, quiet baby. However, at three-weeks-old she didn't seem ‘right’."

“I spoke to the health visitor, but she thought it was just a cold and gave us advice on how to treat it. A day later she was vomiting everything back up and had a temperature. She was also very reluctant to settle, meaning I spent three nights awake in the lounge with Charlotte screaming though day and night."

“On 19th February 2014 we noticed a discharge from her ears, so I took her to the doctors, who took her obs and then rushed us straight to hospital."

“At the hospital the consultant started iv antibiotics, thinking it was an ear infection. They were planning a routine lumbar puncture for the 20th but the consultant was so busy (and they didn't think it was serious) so it ended up being the next day."

The next 24 hours were critical

“On 21st February (my birthday) my daughter was taken for a lumbar puncture. Three hours later, all of a sudden, we had two consultants and quite a few nurses in the room. I was told my daughter had pneumococcal meningitis and the next 24 hours were critical as her temperature would not regulate."

“The next few hours were a blur. I had consultants in and out of the room and then I had to nip home and tell my husband, Gareth, who was at home with my other children, Matthew and Rebecca, who were eight and nine."

“When we knew Charlotte was getting better we took the oldest to the hospital to see her. That's when we explained what was happening. We also told their teachers so they could have other people to talk to as well."

“Three weeks later, after many syringe drivers and antibiotics, Charlotte came home, but we were warned she may never walk and talk, so we took each day as it came."

“Eighteen months on she is a very bright, stubborn and vocal little girl, who I am so proud of every day."

“I wanted to share our story to show that meningitis isn’t always bad news; if you catch it early then everything can be okay.” 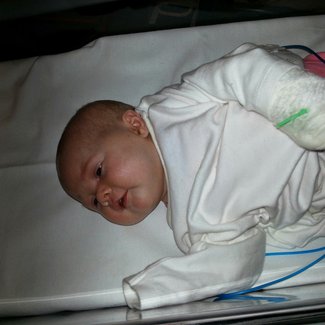