But the inspiring teenager has not let his meningitis experience inhibit him. Never giving up on his dream to become a magician, he has trained himself to perform mind-blowing card tricks.

He tells his story here

“I don’t remember much about contracting the disease as I was so young, but I am living with the after-effects of this disease every day.”

“Although I use a prosthetic leg, I have never let this hold me back. At school I was an active member of my local Army Cadet Force, and I have always enjoyed swimming and outdoor pursuits. I also received a Diana Award for promoting disability awareness in my school.”

“I now also play Sledge hockey - which is ice hockey adapted for people with disabilities - and have just been chosen to represent Great Britain.”

“But my big passion is magic. I saw some people doing tricks at my twin brother and sister’s christening and the next day I got myself a deck of cards. I thought that it was completely impossible so decided I wanted to try it for myself.”

“I feel like I've come a long way because to start with I couldn't even pick up a pack of cards and I really had to practice every chance I had.”

“I looked at videos of magicians online and adapted them. I’ve been building up the tricks I know and people seem to like them – the response I’ve had to videos online is incredible.”

“I've always been fascinated with magic and was bought up to not let anything stop me from achieving my dreams.”

“Now I’m studying for a degree in Illustration, alongside working as a magician at events – I hope my story shows anyone suffering the after-effects of meningitis that dreams can come true, don’t give up. You can achieve something if you put your mind to it.” 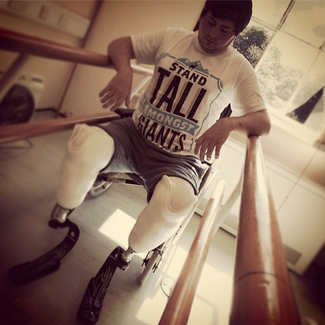