He was just 4 years old and it all happened very quickly, leaving Katie, from Huddersfield, shocked and confused. She tells their devastating story here.

“Enzo came home from school on Tuesday (13 November 2018) saying his legs were hurting. I rang school to see if anything had happened and they said Enzo never told them. When I asked Enzo he said he fell over, so I left it at that."

“On the Wednesday Enzo went to school fine. He loved school and never wanted to miss it. I went to work and got home at 6ish. When I walked through the door Enzo was sitting on top of my brother Marcus, fighting with him, which was a normal day when they were together. I got Enzo and his brother Reeco ready for bed."

“I put his brother to bed and sat with Enzo on the sofa and we had a kiss and cuddle and I told him he had 20 minutes before it was his bedtime. Enzo sat and watched Alvin and the Chipmunks, his favourite television programme. He used to think he was Alvin, the little monkey. I gave him a kiss and popped to my mum’s."

“Lee, Enzo's stepdad who he called Dad, put Enzo to bed. I got home an hour later and Lee said he went to bed fine and was watching TV in his bed. I went up and he was fast asleep. I gave him a kiss, told him I loved him and left his room."

“The next I heard was when Enzo got into my bed at 1am saying his head was hurting. I put it down to a flu/cold, which was going around the family. I gave him some Calpol and got him a drink. He cuddled up to me and went back to sleep till 7am when I woke him up for school."

“"I don't want to go to school today Mummy, can I lie on the sofa today?", Enzo said as I woke him up. I kept Enzo at home and he lay on the sofa watching superheroes and just asking for orange flavoured water. When we ran out about 10ish I rang my brother to come and look after Enzo while I went to Asda with my mum and grandad."

“When I was going Enzo gave me a kiss and said, "Don't forget my water Mum and take Reeco with you so he doesn't bug me." Whilst in Asda my brother rang and said Enzo was fine but wanted his water, so we hurried back."

“Once back Enzo’s breathing didn't seem normal. I woke him up and he started breathing fine again. Enzo had asthma as a baby so I put it down to that. I rang the doctors as once a year he would get poorly and then normally was fine the next day. He never went to the doctors for anything apart from a cold or flu once a year, so nothing seemed unusual. I thought he had his yearly cold."

“It got to around 1pm – I’m not sure on exact times – and I rang the ambulance because I wasn't happy with the way he was breathing. When the ambulance arrived they said, "We are going to take him to hospital as he seems like he has got flu and is very tired." We got half way to hospital and then the blue lights and sirens started."

“When we got to Halifax Hospital there were a lot of doctors and nurses waiting for us. My heart dropped and my mind went blurry. I didn't know what was going on and the next thing I remember was the doctor saying "You need to call Dad and get him here. We are going to put him on this machine to breathe for him – his airways are closing up faster than we would like. He is very poorly.""

“At that point I realised I hadn’t brought my phone. I found a phone and got through and my mum, grandad, cousin, auntie and dad were on their way over when Enzo went for his scan. We waited about 10 minutes and the doctor said we need to get him transferred to Sheffield or Leeds. They were on the phone a lot and I sat cuddling and telling my beautiful big boy how much I loved him and that he needed to wake up, I needed him. He was my first born, he was the reason I knew how to love anybody - he had brought me so much joy and emotion since he was born."

“The next thing three people walked in. They were the transfer team and they started putting needles into Enzo all over and moving machines. I had to walk out, I wasn't ready for all this. I didn't know what was going on. Next thing a woman came out and said "Leave Grandad with Enzo; can I talk to the rest of the family in this room." At this point there were a lot of us as I have a big family and once they heard about Enzo being in hospital they all came over." 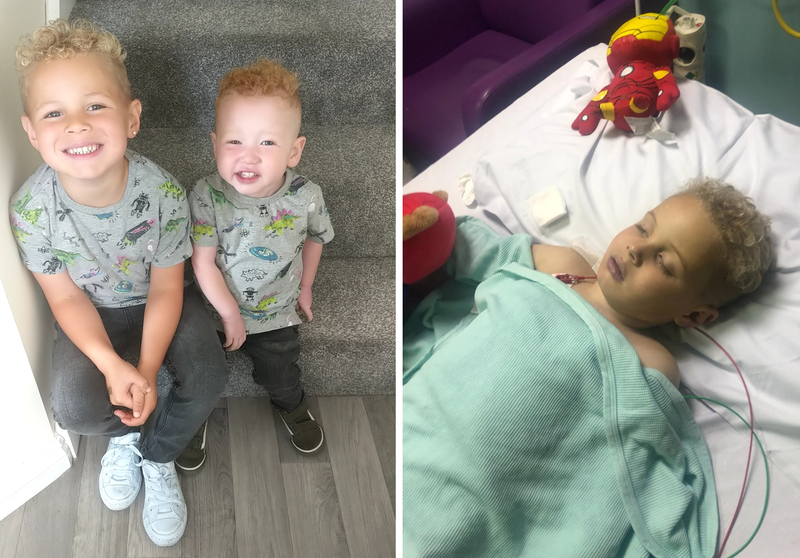 Nothing that can be done

“Once in this room I got told something no mother, father, auntie, uncle, anyone should hear. "Enzo has meningitis. There is nothing that can be done, his scans have come back showing he is brain dead and his brain has moved and dropped down.""

“I didn't cry, I don't know why. I think I was in shock. I asked her "What could we do? Was there any chance of him surviving?""

“The reply came: "I am sorry Miss Joyce, there is less than 3% chance of survival." I broke down and walked out of the hospital. Next thing my cousin came out and said "They are moving Enzo to his own ward for us all to say our goodbyes"."

“Why? Why do I have to say bye to my superhero boy? The happiest, most bubbly boy I ever knew. Why my baby, the boy who made me who I am, the boy that I did everything in life for, the boy who gave joy even when he was being a monkey! He would make me laugh and smile and I was so, so proud of him every second of every day."

“We went back into the hospital and got taken to a ward where it was all closed off. There were about 30 family members here at this point. I walked in and my grandad was leaning over the bed holding Enzo's hand. All I remember hearing was the machine beeping. A nurse came into the room and asked if I would like to get Enzo baptised and, as my grandad is Catholic, we did this straight away."

The hardest, most painful thing ever

“After this all my close family were there and we turned the machine off, which was the hardest, most painful thing ever. I still don't have words for how that made me feel. I felt a pain I have never felt before, I was numb and started being sick. I couldn't talk or anything. The days after that were like a blur."

“I got up somehow and made sure his baby brother was okay. Enzo's body was then moved to my grandparents’ funeral home, the Gables, Huddersfield. I felt then like he was back with us. I could visit him whenever but it still didn't feel real; it was like he was at a sleepover and I was waiting for him to come home."

“Still to this day I can't get my head around why this happened to my beautiful boy, who had his whole life in front of him. He had just started school and was ready for what the world threw his way."

“Why was he taken from a family he loved and who cared for him? No one could imagine. Why did my happy, healthy baby get taken from us so fast? I wake up every morning asking questions I will never get answers to. But I have to get up and do things with his little brother because that’s what Enzo would have wanted - he adored his baby brother and would not want me to make his brother’s life sad and unhappy." 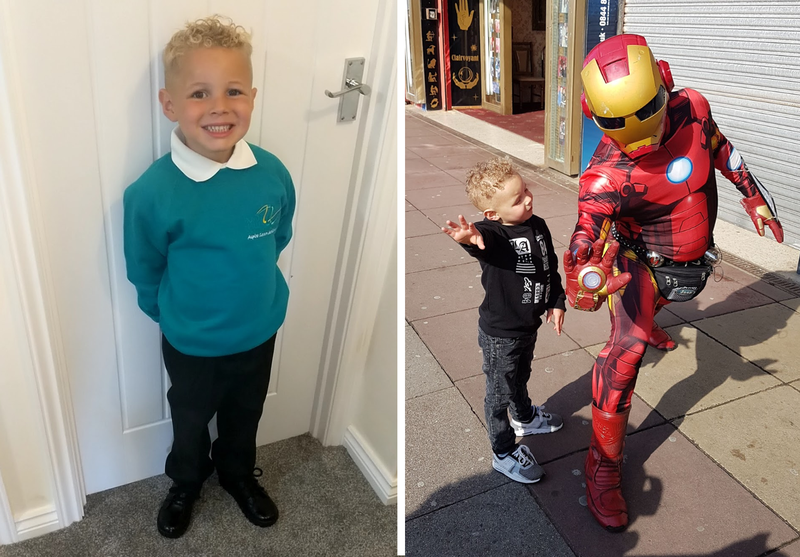 “Enzo loved life and was a massive superhero fan. He didn't have a favourite but he loved Iron Man and Spiderman. He would always sit and play with his Batman house and figure for hours and anytime he met a superhero on a day out he would be in his element. He was full of life and could be a very cheeky monkey! He loved being around friends and family. He was the most caring and bubbly big brother anyone could ask for and would give the best cuddles to me morning and night. He would always make sure he told me he loved me – "Love you Mummy 12345" was his saying. Then I would have to reply "Love you baby 678910"."

“I can't explain the suffering I deal with daily because no words come close to how I feel.” 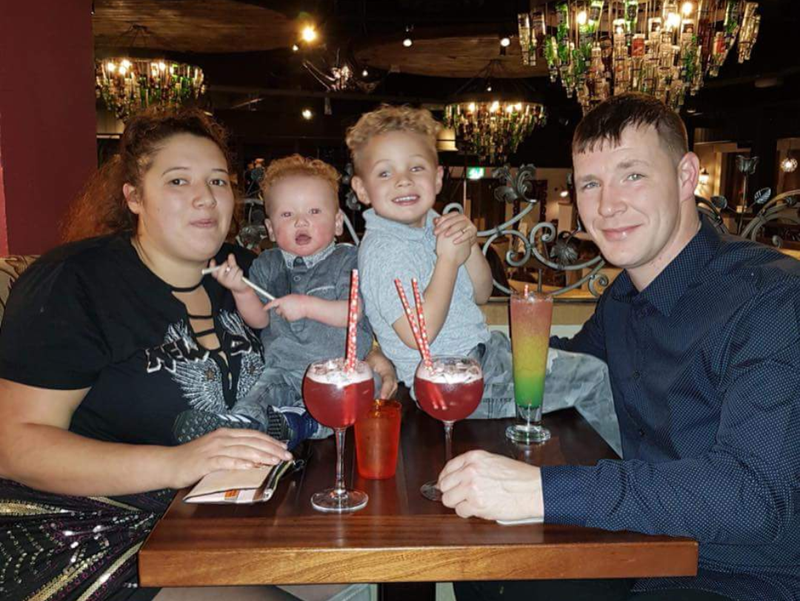