“Monday the 4th of April - the day our lives were truly broken.“

“Fleur woke up at 3.10am feeling warm, so as a mother I did the usual; stripped her down and gave her Calpol and fluids to drink.  After settling her she went back to sleep.”

“At 7am she woke. She didn't quite seem herself but I wasn't concerned, I just thought ‘typical, another bug’. I picked Fleur up to change her nappy and she had febrile convulsions in my arms. Not experiencing this previously I was screaming as I thought she was dying.”

“I called the ambulance and they arrived promptly. They gave Fleur the once over and said ‘as it was her first we will take her in for a check-up'.“

“We arrived at PRH at about 9.30am. Fleur seemed to perk up a bit and I thought ‘great, quick check up then home’.”

“After spending what felt like forever in A and E we were seen. By this time Fleur seemed okay, playing with toys etc. Fleur then begun to bring up phlegm which she was finding difficult. I went up to the nurse who then approached the doctor. She decided to do an X-ray and after checking Fleur’s throat she said she had a sore throat. The X-ray came back clear.”

“They then decided they would do some blood tests, which would take between 12 and 48 hours before we would get the results. At 3pm they decided to keep her in for the night and at 4.30pm we were taken to the children's ward.”

“At the time it was tea time, so we decided to try Fleur with some tea as she hadn't wanted any food all day. One mouthful, that's all she had. I noticed a mark appear on Fleur’s neck, so I took her vest off. Before our eyes the blotchiness came from nowhere. My husband went to get the nurse but by the time she arrived it had gone, only leaving a pin prick on the forehead and one on her tummy.”

“They then realised things were more serious than they first thought.  Fleur was taken to resus, where a team of people came. It was like a bad dream before our eyes.  They began to pump her full of antibiotics and fluids.”

“I remember hearing the word meningitis. We were like ‘we've been here all day; why haven't you said this before to us?’.”

"What happened that night has changed us all as people. If we can stop other parents feeling like we do it’s worth the fight. To cut it short, more needs to be done, more awareness raised - it’s not always about the rash. On Sunday she was healthy and happy; by Monday night she was gone.”

“We thank everyone for the support we've received - from the wristbands, posters, advertising and website. The list is endless. Without your help we aren't able to undertake this fight - not just for Fleur but for every child who loses their battle or who lives with this horrible disease daily.” 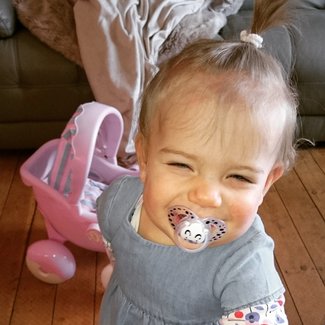