She was right, Joe had contracted pneumococcal meningitis. The youngster, from Darlington, has been left with after-effects, but is still an inspiration. Cherelle recalls their experience here.

“When he first became poorly he had a piercing cry like a screech. We later found out this is referred to as a brain cry, due to all the pressure in his little head."

“This time he was spiking high temperatures, was floppy and vomiting. Nurses and doctors said it was ‘just flu’ and tried to send us home again!"

“I knew something was not right and stood my ground. I demanded bloods and after hours the doctor finally gave in. I remember he came running in saying we need to do a lumbar puncture as soon as possible. His CRP level was 390."

“My little boy Joe was diagnosed with pneumococcal meningitis. He rapidly went downhill and had an hour-long seizure. He was placed on life support at our local hospital."

“We were transferred to Newcastle RVI where he acquired a large blood clot on his brain. He was moments away from having a stroke. He was still having seizures on PICU and also had a blood transfusion. His eyes were deviating. We couldn’t get any access into him as he was so poorly. We tried femoral lines, which wasn’t good to watch. He was green bagged round to theatre many times and finally we managed to get a central line through his neck, which had endless problems."

Not the same little boy

“We had issues extubating Joe, and it felt like a lifetime to take him off life support. When we extubated Joe his eyes were cross eyed. We were told our little boy may have suffered brain damage, that he is really poorly and going off past patients he won’t be the same little boy again. We were also told he would have some form of cerebral palsy."

“His blood pressure went to 200 and then as low as 13, where the crash trolley and adrenaline was drawn up. He then became sicker and caught gastroenteritis. The seizure control worsened when he had this. After this Joe had another MRI, which showed he had bilateral empyemas (which are collections of pus walled off in his brain) and residual meningeal enhancement. This made him really poorly and he began to have more seizures."

“Joe also lost his hearing in his left ear. However, it has come back, which is excellent."

“His ultrasound also showed liver cirrhosis and we are continuing to monitor this to see how it’s doing."

“We resided in hospital for eight weeks and continued to have IV antibiotics for three months through his central line. It was a living nightmare." 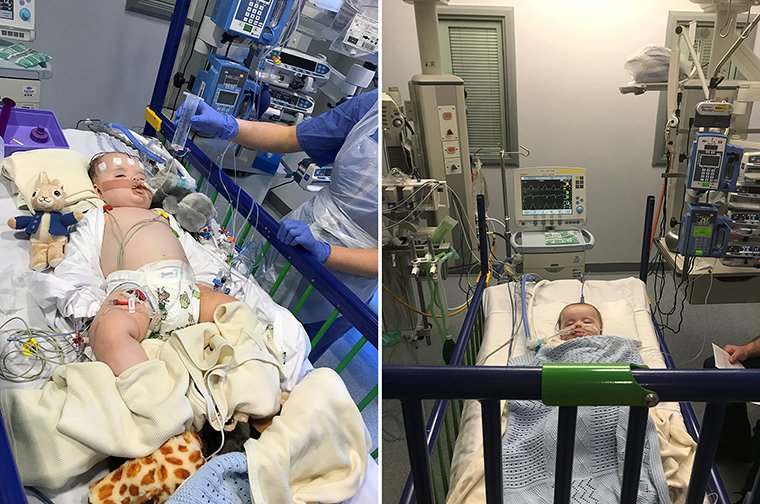 “Joe has sodium valproate to control his seizures and prophylactic amoxicillin since having his central line taken out. This is because he got another bacterial infection and was rushed back into hospital seven days after stopping his IV antibiotics."

“Despite all of this Joe is an absolute inspiration. He is an incredible little boy."

“When Joe was critically ill all we wanted was answers. Unfortunately no one could tell us if our little boy was going to survive. I found the Meningitis Now website really helpful and reading other families’ amazing and inspirational stories helped me to cling onto hope."

“Miracles do happen, so if you are going through the same thing now, have faith."

“We do still get anxious though in case our little boy gets poorly again and whether we’d know if it’s just a normal childhood illness or something more serious.”