Thanks to her prompt action Tilly was soon on antibiotics and has gone on to recover well from MenB. Katie, from Pelton in Co Durham, tells their story here.

“My daughter Tilly woke up on Monday 25 November 2019 at 4.25am being sick. I just put it down to a sickness bug as my two boys, Levi and Caleb, family and friends had all had it. I woke up at 7am and started to get the boys ready for school. Tilly just seemed out of it, like she could not be bothered."

“She had a temperature again but I just thought sickness bug, gave her Calpol and she went to sleep. I kept looking at her as the morning went on and something was just not sitting right with me. I tried to get in to the doctors but there were no appointments left, so I was told I would get a call back."

“Not even 20 minutes later, and she began to cry "Mammy". She was pale white and her whole body was jumping. I decided to ring 111, but they were having a high number of calls, so we were put on hold."

Ran to get a tumbler

“I looked at Tilly and could see a rash. I knew this wasn't just a heat rash from when you’re hot – it was dark and more prominent. I ran to get a glass tumbler and when I put it over her body the rash was not going. My heart must have missed 1,000 beats. I picked up my phone and rang 999 and they said an ambulance would be out within 18 minutes."

“As each minute passed she was getting more spots, some blanching and some non-blanching. Her body was jumping more and more and it looked like she was fitting. I was in absolute panic mode."

“The ambulance arrived 40 minutes after our call. When they first came in they said it looked like chicken pox. I felt stupid at first but still something in my body was telling me that something’s not right here. They took her temperature and it was 39.1. We cradled her up and carried her to the ambulance."

“They took a heel prick for blood, a tip on her finger to test her stats and then placed a heart monitor on her. I just remember seeing 204, to me that meant nothing but within seconds the paramedic was on the radio and we were being blue lighted to hospital. They gave Tilly an antibiotic injection and I just lay and held her tight."

“When we arrived at the university hospital of North Durham they scooped Tilly up and ran with her to resus. Nurses rallied around her taking blood, giving her fluids and injections – it’s all such a blur. Things seem to settle and they rang the children's ward, but the one room available hadn't been cleaned, so we were just waiting."

“Within not even half an hour her blood pressure plummeted, they tried to sit her up in the bed but she was just falling, she was out of it. She was delirious, they placed her on oxygen but I could tell they were really worried. As I looked around, people were on the phone, more and more doctors and consultants were entering the room, talking, coming over to her and asking for this and that to be done."

“I heard them say they were ringing the RVi, as it's known (the Great North Children’s Hospital). I knew this made it really serious. I remember hearing ‘meningitis rash’ and I remember thinking, "I'm so scared", as each doctor and consultant introduced themselves to me and Tilly’s dad. I can't remember truthfully what was being said, I was just numb and scared. I remember hearing, "We need to put her to sleep now, her body’s fought hard enough and can't fight by itself any more"."

Can’t put it into words

“I can't even put into words what I was thinking and feeling. I wouldn't wish it on any person in the whole world. We were told they were taking her up to theatre to ventilate her (an induced coma) and that she would be going to the RVi Newcastle and doctors were coming from the RVi."

“As they wheeled her up through the corridors and lifts, I was looking at her little body lying lifeless and praying to God, please Lord save her. We were sat down as they wheeled her away and told we could see her once she was stable. Every second felt like minutes, every minute hours, every hour days. After a time we were told she was ventilated, but we were waiting for the doctors from the RVi to get here and that all the lines, tubes etc would have to be changed for them to take her."

“After a time two paramedics and a doctor came. The staff nurse on theatre was keeping us informed, but it was feeling like hours every second. Your mind is racing with so many thoughts. A time later a man and women came and introduced themselves as consultants from the RVi. He  began to explain and asked if I understood what was happening. I didn't really, I was trying to think of anything to make this not real."

“I asked what any parent would ask: "Is she going to die?" As I looked at their faces (praying they would say no) I heard the words, "We need you to understand, Tilly is very, very poorly". I broke down, my worst fears had been confirmed - she could actually die."

Kissed her head and told her I loved her

“We were taken along to see her. She looked so peaceful sleeping, but had tubes and lines all over her body. I kissed her head and told her I loved her. When we arrived at the RVi it felt like hours we were waiting but eventually she was stable and we could see her. She was lying with tubes and machines all over and all I could see was a rash."

“Her dad and I never left her side. You listen to what's being said but you don't understand meningococcal septicaemia, meningitis. The next morning on the doctor’s round we asked, and they said that they were treating her for meningococcal meningitis, as she was showing all the signs. She was getting antibiotics but we wouldn’t know for certain until her blood cultures came back, which would take around 48 hours."

“The next two days were horrible. Her stats and blood pressure were still unstable and they were pumping her with medication to help her, but it was making her body swell. Her rash was spreading. I asked "Would she die?" and "What is her chance of survival?", but they couldn't tell me. Eventually, after 48 hours, we were told Tilly had meningococcal type B. Even though we knew deep down she was being treated, to hear the word meningitis is one of the worst things any parent can hear."

“Over the next few days Tilly began making progress. Her medication was decreased and her sedation reduced. Eventually, on the Friday, they took her ventilation off. The consultant, the same man who had transferred her, said, "Tilly has been so lucky, if it wasn't for your quick action in recognising the signs and her getting antibiotics early, things could be different." He explained he could never answer my question as it's such an unpredictable disease, but I should be proud."

Transferred back to Durham

“On the Saturday we were transferred back to Durham. Tilly spent a further few days in hospital. She was withdrawing from all the medication (especially morphine), she couldn't recognise me and was hallucinating, but she was alive. Doctors were so happy and amazed at her progress and to date she has no after-effects."

“We have to go for tests to find out why she contracted this disease as she had been fully vaccinated against it, but all I know is that I can't fault our treatment and we owe our daughter’s life to the paramedics, the staff at UHND and all the staff at the Great North Children's Hospital, the NHS as a whole.” 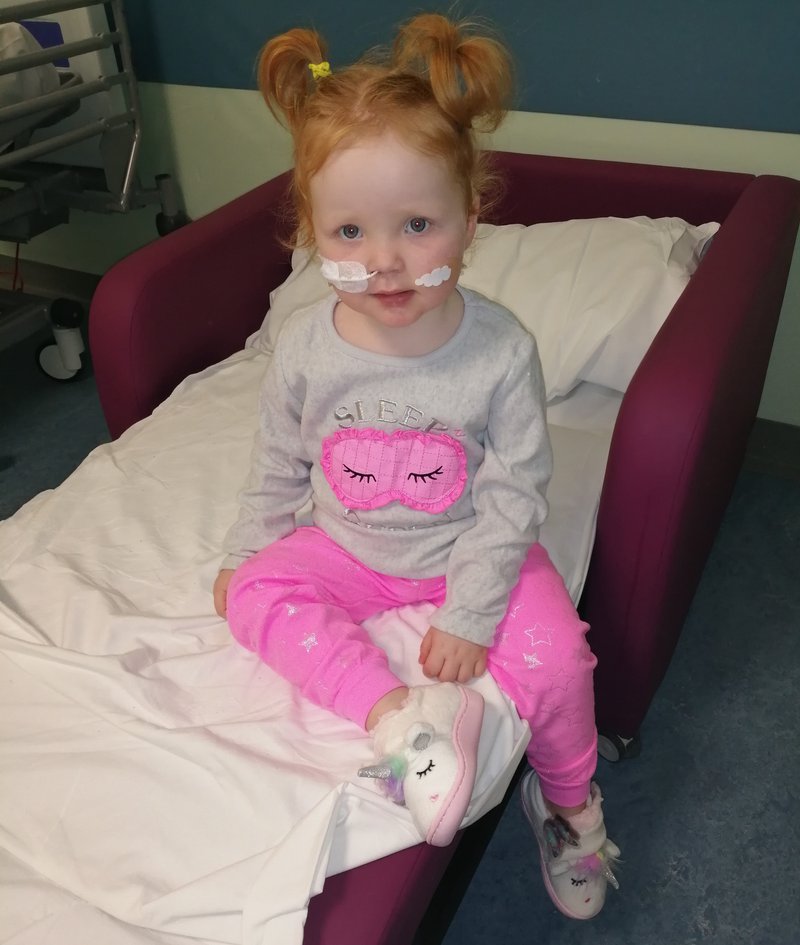