George had contracted meningococcal septicaemia, but thanks to quick treatment went on to make a good recovery, as Lauren, from Cirencester in Gloucestershire, recounts here.

“My son George was 3 months old when he had meningitis. He had been a perfectly healthy, happy and thriving baby. Myself, George and my husband Adam were still in that lovely ‘newborn bubble’."

“George went to bed as normal on Monday evening. He had been happy and drinking his milk as usual throughout the day. At 4am he woke up with a really bunged up nose, he’s usually a very good sleeper through the night so I thought he just had a cold and gave him some Calpol. His temperature was normal. He wouldn’t go back into his crib and would cry unless I was holding him but slept well in my arms."

“By the morning I noticed George’s breathing was very fast and laboured. He then started to make a really strange groaning noise from his chest. I called the doctors immediately and was told to bring George in straight away. The doctor suspected bronchiolitis and as George’s temperature was now at 38.2 C, I was told to drive straight to Gloucestershire Royal Hospital so that the paediatric unit could assess him and give him some oxygen."

Took him to hospital

“Luckily my sister Niamh was with me and we both took him to the hospital, still not too concerned that there would be anything more than a chest infection."

“Once arriving at the hospital a nurse called us through within five minutes to take some observations, after linking George up to a machine to read his heart rate - which was 245 bpm! The nurse immediately left the bay and within seconds there were six or seven doctors and nurses surrounding George. They were measuring his oxygen levels which were dropping, taking bloods and administering painkillers and antibiotics via a cannula. Nasal tubes were put into George’s nose."

“George’s temperature was now at 40.1 C and he had rapidly deteriorated from the time we left the doctors. Two senior doctors requested a mobile X-ray unit be brought into the bay where George was being treated to scan his chest. The results immediately came back that he did not have a chest infection."

More serious than we thought

“I remember watching the doctors and nurses work so urgently to help George, my sister Niamh looked at me and we realised this was much more serious than we ever thought possible. After George had been initially treated a doctor took me to one side and told me that George was very seriously unwell."

“George was then moved to the High Dependency Unit where his oxygen levels and heart rate could be constantly monitored. He was also linked to an ECG machine for a couple of hours to check his heart. I will always remember the teddy bear stickers on his chest, which were on the end of each wire."

“I spent that first night just staring at him. He was semi-conscious and trying to cry but didn’t have the energy. He did let a hint of a smile show when he saw his dad, which was really heartbreaking, but we knew our boy was still with us." 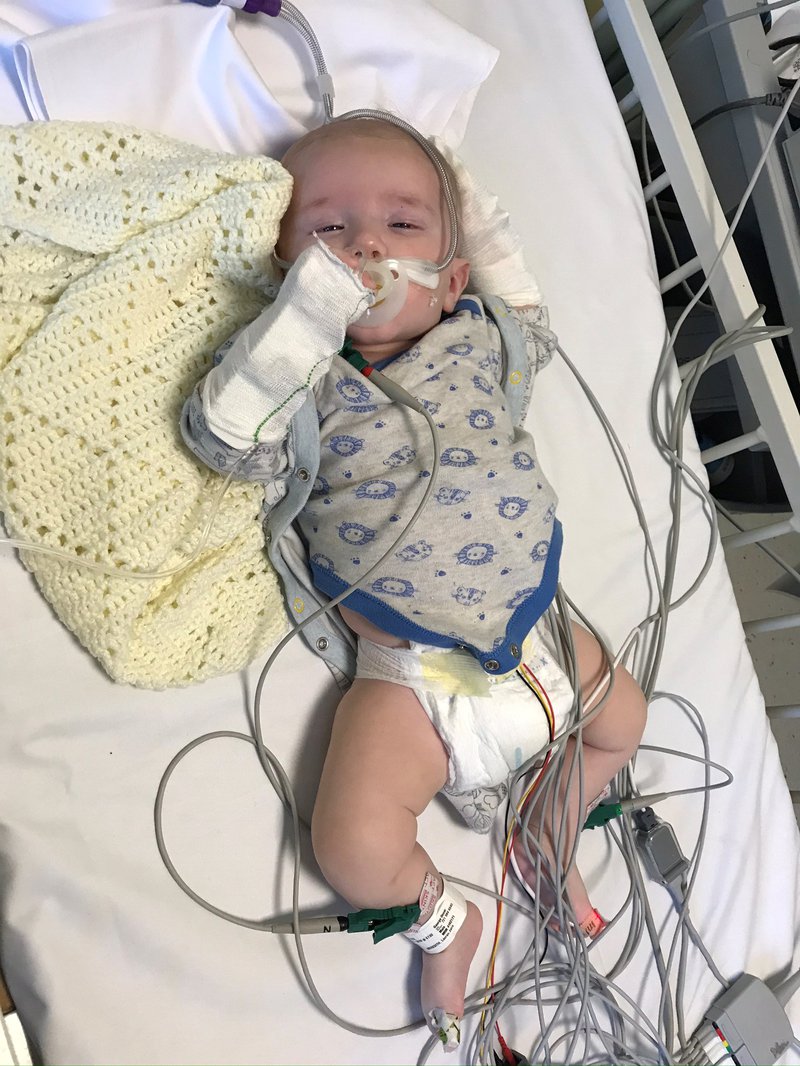 “The next day George’s oxygen levels had stabilised, so we were allowed to move into a private room on the ward. A consultant came to see me and explained that cultures had started to grow on the blood tests taken and meningococcal septicaemia was present. A lumbar puncture would need to be carried out and myself, my husband and my sister would need to take antibiotics as we had all had prolonged contact with George."

“Public Health England were in touch immediately and had to take full details of anyone who had been in contact with George and exactly what had happened. The doctor came to do the lumbar puncture and said that it was best if myself and my husband Adam were not present. Luckily at this time Public Health England called me to ask questions, which was a huge distraction and kept my mind busy for the 20 minutes I couldn’t be with George. We were told we should have the result back within hours."

“At around 11pm the consultant came into George’s room and said that white blood cells had been found in the spinal fluid, indicating meningitis had been present in the blood. The lumbar puncture was now being sent to Manchester for further analysis to see if it had reached George’s brain. Either way, the treatment with antibiotics was the same, it was just the duration which had to be increased if meningitis had got to George’s brain. I sat in disbelief for the rest of the night."

“George continued to respond really well to antibiotics and on the Friday evening after three nights and four days in hospital we were allowed to go home, on the condition that a community nurse would visit over the weekend to administer George’s antibiotics via his cannula and we would return on Monday for hopefully George’s seventh and final dose. We would also have the result back from Manchester by then." 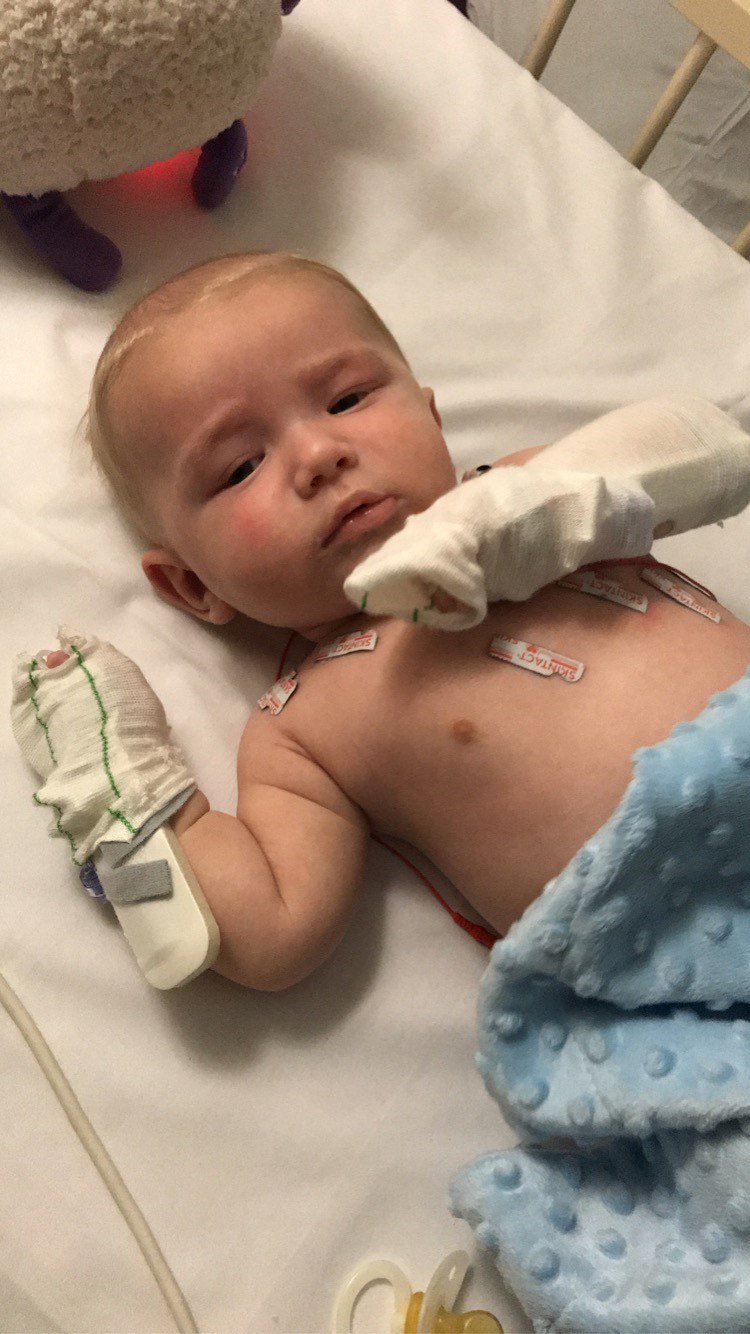 “My husband drove us home from Gloucester and it felt as if I had been in a bad dream. That Friday night George woke us every hour, he wouldn’t drink any milk and we worried we should have stayed in the hospital. The community nurse came both Saturday and Sunday and George did improve rapidly. He seemed to get his healthy appetite back and even started to giggle like normal."

“On the Sunday evening before we had to return to Gloucester to see the consultant I remember sitting on the sofa and the past week just seemed to hit me at once. I went into auto pilot when we were in the hospital as I had to be strong for George. Now that we were home but being faced with more uncertainty and stress to come the next day every emotion seemed to come to the surface."

“Good news finally! The results were back from Manchester and there was no sign of meningitis reaching George’s brain. There should be no lasting damage and this visit back to the hospital would be George’s last dose of antibiotics."

“We feel extremely lucky and grateful to all the doctors and nurses in the children’s centre at Gloucestershire Royal. Life is so busy it’s easy to think this was all a bad dream, it’s only now that a month has passed that the reality that things could have turned out very differently for George is overwhelming and I find myself getting upset when I think back to what happened."

“Just writing this and getting my thoughts out of my head is really therapeutic in a way. I feel so lucky and grateful that George survived and is well again.”