Luckily, trusting her instincts and seeking medical help meant their story has a happy ending. Kirrily urges parents to be meningitis aware as she tells their story.

“Waking up at 5am on the 24th of July I never imagined my life would be turned upside down. A parent’s worst nightmare was going to become our reality and hell, so to speak, was going to be our new home for the next two weeks.”

“This is Louie's story. I have finally decided to write this, not because we want any sympathy, but simply because we feel that other parents need to be aware of the signs and symptoms that could prove to be fatal if not identified when children become sick.”

“Meningitis - we've all heard of it. The purple rash that we always look out for; you roll a glass onto the rash to see if it disappears. Generally it always does, but this isn't always the case.”

“When Louie woke up on Friday morning he began grunting. I tried to feed Louie as this always settles him, but no, Louie wouldn't feed and he still hadn't opened his eyes. I just assumed he was tired. I led him down next to me and he fell asleep, skin to skin, still grunting.”

“A few hours later I woke up and Louie's hands felt as though they were burning into my skin - they were on fire!”

“Eyes still closed I took his temperature and it was creeping above 38 degrees. Louie had never been ill before, so as a precaution I gave him some Calpol. He instantly fell back to sleep, still grunting.”

“A short while later I attempted to feed him again but he still refused. Louie had become really floppy and it felt as though he couldn't bear to be touched or moved. Something told me this wasn't right.”

Things took a turn for the worse

“The NHS symptom checker advised me to call 999 but, not wanting to over react, I called 111. They sent for a paramedic as Louie was pale and his lips had turned blue.”

“The paramedic sent for an ambulance after telling us that he thought Louie might be constipated. That was when I noticed a purple spot on the back of his head but nobody was too worried at this point.”

“We arrived at Chesterfield Royal Hospital thinking we would be home within an hour or two but things took a dramatic turn for the worse.”

“Within minutes we were surrounded by 10-15 people and we started to panic. We were quickly informed there was a suspected infection of the blood/blood poisoning. Our tiny boy had to be pumped with nearly four times the amount of fluids and antibiotics a six month old baby's body could handle, but for some reason this wasn't working.”

My baby was very, very sick

“Chesterfield liaised with Sheffield Children's Hospital and we were told to take him there. Embrace (the specialist transport ambulance for critically ill infants) arrived and we gave our baby a kiss before they put him to sleep. Now they had to stabilise our son and wait for a window of opportunity to move him.”

“It took what seemed like a lifetime of waiting to get moving but we arrived there very quickly and it was enforced upon me that my baby was very, very sick.”

“Louie was taken straight to the Intensive Care Unit by the Embrace team and put into a cubical in an induced coma which paralysed all of his tiny body.”

“When we were allowed in, his whole body was covered in spots and there were wires and machines surrounding him to support every part of his body. There were numerous drugs being pumped into our baby just to keep him stable. It was terrifying.”

“We were took to one side by the consultant who explained to us that our son had been infected with meningococcal disease which had caused bacterial meningitis (MenB) and septicaemia.”

We were told to prepare for the worst

“We were told the next few hours were critical, we may lose our baby. We had to hope for the best but prepare for the worst. We were told we had the sickest child in the whole hospital and if he was to survive, there was a high risk he may lose his limbs as they were already cold and losing colour.”

“Every emotion raged through us. How did this happen?”

“We went to bed with heavy hearts and cried ourselves to sleep, praying for somebody to save our son.”

“Louie spent a whole 10 days in ICU with someone at his bedside 24 hours a day.”

“Throughout this time our boy became stronger and he was left to fight the infection himself, and so he did.”

“Louie's kidneys had started to fail resulting in him going on dialysis. One of his lungs had collapsed and he had to have physiotherapy to remove a clot from his lung.”

“On day five doctors attempted to remove his breathing tube from the ventilator but after nine hours, and many other breathing apparatus tried, Louie had two seizures and had to go back on the ventilator. He wasn't quite ready yet.”

“Louie went on to have a CT scan which showed some slight changes to the right frontal lobe of his brain. Would we still have the same beautiful, smiley, happy baby back?”

“We stayed strong and on day seven they removed the tube once more. This time it worked!”

“Our amazing boy was fighting back. It took another three days before we were allowed to hold him. I felt the emotions of holding my new born baby once again.”

We started to get our son back

“On day 10 Louie was moved to a ward where we were about to make further progress, and from days 10 to 15 we started to re-build our son. We got him off the fluid drip and the NG feeding tube, and back onto breastfeeding on demand. He went from being paralysed to sitting up and rolling over with the help of physiotherapy.”

“Throughout all this we had to watch our baby be weaned off the strongest painkillers and sedatives. He was having withdrawals and was in so much pain.”

“Louie had an excellent result from his hearing test and on Friday 7th August we were allowed to bring him home on weekend leave.”

“Before we left, the breast feeding specialist (who had helped me with expressing milk while Louie was sick) asked us to have our photo taken for national breastfeeding week. I was honoured.”

Being meningitis aware is essential

“Louie still has a long way to go with physiotherapy.”

“I really want to raise some awareness of what to look out for - don't just wait for the rash to appear. Always seek advice - if we hadn't this would be a different story. It's better to be safe than sorry.”

“We still have a long way to go but we have the strongest, bravest, amazing little boy who has smiled through all the pain. If he can do that, he can do anything!” 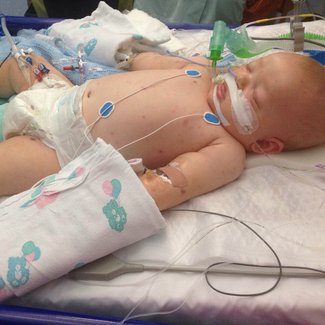 Don’t wait for a rash

There are many symptoms of meningitis. Like Louie, babies can become floppy, refuse to feed and start breathing rapidly or grunting. Symptoms can appear in any order and may not appear at all. Find out more