Concerned mum, Lauren Hammans, of Essex, took her daughter to the out-of-hours doctor when she came down with a fever but freezing cold hands and feet. After being told it was a virus on two occasions, Lauren took her daughter home to recover.

“On Boxing Day 2014 at around 2pm, my eight-year-old daughter, Mia, started feeling unwell. As I was struggling to bring her fever down with Nurofen and Calpol, I made an out-of-hours doctor’s appointment.”

“The doctor chuckled to himself and I was told: ‘Mum there is nothing wrong, just a simple virus. Take her home; give her Calpol and stop worrying about nothing’.”

“I felt uneasy; thinking there was more to it but was also made to feel that I was being over the top by the GP. We went home and carried on with Nurofen and Calpol but still couldn't shift Mia’s fever. She also had freezing cold hands and feet, she wouldn't eat, had no enthusiasm for her Christmas presents or watching TV. She slept a lot and when she was awake she complained of headaches.”

“Unhappy with her condition, I made an emergency appointment with my GP surgery on 31 December, where I was met by a rude and arrogant doctor who said: ‘Look it's the same as the out-of-hours doctor told you - there is nothing wrong, it’s just a virus. If you’re still bothered on Monday bring her back’.”

“I asked for antibiotics and was told no. Mia was not examined on either appointment.”

I begged doctors not to let my little girl die

“We went home again and Mia slept in my bed that night. She was hallucinating but the GP had told me that was normal with a fever.”

“On the morning of 2 January 2015, Mia woke up crying. She started being very sick and quickly started fitting, so I called for an ambulance. They couldn't stop the near 20 minute fit without injecting diazepam.”

“Once the fit eventually subsided, my husband carried Mia to the ambulance and the paramedic radioed ahead for majors to be waiting for her. When we got to hospital seven doctors were waiting. She was taken away and hooked up to numerous machines - I don't know what they were all for to this day.”

“I begged the doctors not to let my little girl die but all they would and could say was that they were doing everything thing they could to 'keep' her. Six hours passed in a blur.  They managed to bring her round, but she couldn't speak for the first few hours and they feared that the fit could have caused brain damage, but thankfully scans showed no damage.”

Care was second to none

“Once her condition had stabilised we were moved from Basildon hospital to Colchester for isolation. We spent four days in Colchester Hospital, where Mia received fantastic care. She was checked hourly for the first two days. Gradually checks got further apart until on day four we were transferred back to Basildon hospital for a further five days on IV meds.”

“The care at both hospitals was second to none - if it wasn't for the expertise at Basildon Paediatric ED I honestly do not think I would have Mia today.”

A year on, I feel like I lost the real Mia

“A year on, and Mia has made a fabulous recovery. She does have sensitivity with her ears; her eyes have deteriorated so she now wears glasses full time, she suffers extreme anxiety, headaches and some issues are creeping in with regards to her brain which needs investigating.”

“Meningitis is a vile, evil disease that, with the medical science available to us, no child need suffer and be left with its debilitating after-effects. I only wish my little girl wasn't now a statistic, left frightened for the rest of her life."

“Although I have Mia here, I feel like I lost the real Mia on the 2 January 2015 as she has changed so much. Our children must have the basic human right to be immunised against this hideous illness.” 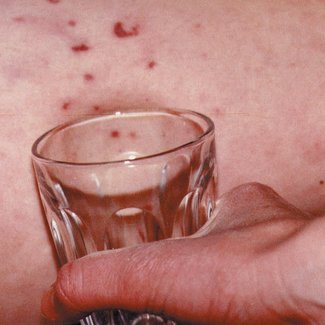