“George was a healthy boy aged 11 months and he had just started to walk around the furniture when first became unwell.

“We decided to take him to the doctors where he was given antibiotics for a viral infection.

“But by the evening he'd gone very quiet and was just not responding as much as usual.  Something inside of me told me to call an ambulance.”

“By the time the ambulance arrived George had lost consciousness and needed to be resuscitated.

“Once at the hospital George was treated for suspected meningitis. After a terrifying wait we were told that his condition was improving but he was still very unwell. It was at this point that we were told by his doctors that he had contracted pneumococcal meningitis.

“Five days later George had an awful seizure and was transferred to Southampton ICU where he spent the next three weeks.

“Whilst he was in ICU we were told George had suffered brain damage as a result of the meningitis.

“He spent the next five months in hospital in Southampton, before being transferred back to the Dorset County Hospital in Dorchester closer to home.

“It was only then that you can see what damage had done. George lost his hearing and we were told there was a big chance he wouldn't walk again.  He had no way of communicating and swallowing food wasn't safe as every time we tried he'd end up in ICU as it would go to his lungs. 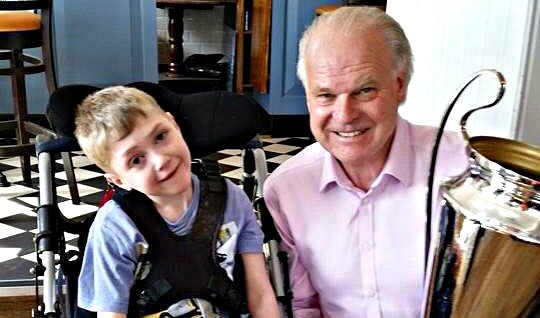 Living with the after-effects of meningitis

“Eight years later George is still fed by a tube, he is wheelchair bound and has severe scoliosis, hydrocephalus (water on the brain) and epilepsy, all as a result of the meningitis.

“Despite everything George has been through and what he endures, he wakes up every day with a smile.

“He loves to meet new people, being sociable and goes to an amazing school which meets all of his needs.

“As a family we’ve had to learn how to manage his advanced care plan as George is struggling, and his medical team are helping us to build memories as a family.

“Together they’ve helped us to realise that it’s about the quality of life not the quantity.”

George’s parents, friends and family have done an incredible amount to support Meningitis Now, raising thousands of pounds through challenges and events and have helped to raise awareness of the disease.

More information on how to fundraise for Meningitis Now.