Shortly after being diagnosed with flu, his condition rapidly deteriorated and he was rushed to A & E. He was diagnosed with meningococcal group Y meningitis and septicaemia.

“The day had started out as normal and he'd gone off on the bus that morning. He fell ill suddenly in a lesson at his new secondary school with a high temperature.”

“Within a few hours of being collected, Nathaniel had a very high fever and began vomiting violently. He developed severe dizziness, photophobia, a headache, stiff muscles and pain in his legs. We were getting worried that he had an ear infection or tonsillitis so later that evening he was seen by an out of hours GP who diagnosed flu.”

“We queried whether it could be meningitis, but the GP was convinced it was not as there was no visible rash.”

“But during the night his condition plummeted, and by morning he was becoming confused and unresponsive. We were in the process of deciding how to get more medical attention for him when he had a seizure.”

“By now Nathaniel did not recognise us and was taken to our local A & E by ambulance. He was taken straight into resus and lots of doctors began working on him immediately.”

“Despite having no rash, the hospital medics suspected Nathaniel had contracted meningitis and began intravenous fluid and antibiotic treatment. It was awful watching them struggle to get any IV access because he had become so badly dehydrated.”

“By lunchtime a scan revealed swelling on the brain. He'd also developed septicaemia.”

“Within 24 hours, our fit and healthy child had deteriorated to the point where he was placed on a ventilator in a coma and was fighting for his life. All we wanted to do was switch places with him, but there was nothing we could do but pray.”

“It was unimaginably distressing to watch as it became clear that Nathaniel’s condition could prove fatal.”

“Doctors were unable to perform a lumbar puncture test to identify the bacteria because he was so dangerously ill. He was transferred to the paediatric intensive care unit at the John Radcliffe Hospital, Oxford.”

“Over five days in intensive care his kidneys began to fail, and his whole body was struggling under the attack of the infection, but the team worked around the clock to do everything possible for him.”

“We, along with our other two children, were treated with antibiotics as a precaution. Hundreds of people began praying for Nathaniel through our church.”

We began to see some improvement

“Nathaniel began to make small signs of improvement. He came off life support and out of the coma. Medical staff warned us that it would take a while to establish if there was damage to his brain, sight and hearing, but we were just grateful at this point that we had not lost him.”

“He was terribly frightened, and so confused that he asked us to explain who he was! Initially he had no idea where he was and was very distressed. He remained in hospital on antibiotic infusions for two weeks.”

“In the meantime we and his brothers received the ACWY vaccine to protect us.”

A long and hard recovery

“The recovery process has been like climbing Mount Everest, and we have not yet reached the top.”

“Months of convalescence and physio/hydrotherapy have helped to rebuild Nathaniel's muscles and physical strength to some extent, but he still struggles daily with fatigue, low concentration and sometimes feeling depressed.”

“Returning to school has been exhausting.”

“The whole experience has been terribly traumatic but our faith has carried us, and we realise that compared to others who lose limbs or end up with brain damage, blindness or deafness from meningitis, Nathaniel has been incredibly fortunate.”

“Meningitis tried to steal our child, but fast intervention saved his life.”

“We are immensely thankful to the NHS for the amazing treatment Nathaniel received in Reading and Oxford. Without the swift action of the medics after we dialled 999, Nathaniel would not have survived.”

“We know how devastating meningococcal disease can be, so would urge all who are now eligible under the new ACWY vaccination programme and MenB programme to make sure they get their child vaccinated to prevent the same thing happening to their loved ones. No child should go through this devastating illness when there is a way to prevent it.”

“Meningitis Now has helped us understand the recovery process after meningitis and enabled us to learn more about fatigue management. Meningitis is like a tornado that sweeps in without warning, and destroys lives. Be vigilant - know the symptoms!” 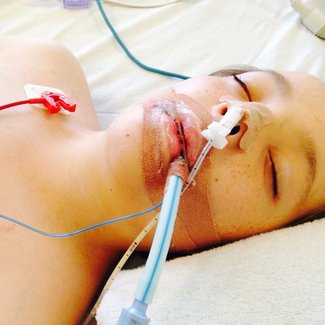 How can you prevent meningitis?