As the night wore on he was delirious with a temperature. His dad checked him over on a hunch and found one mark under his left armpit. We rushed to A&E and in the twenty minutes it took to get there, the rash had spread all over, mainly to his feet.

He was sedated straight away and given antibiotics. He was transferred throughout the night to Sheffield children's ICU. It took four hours to stabilise him and make him comfy.

He was hooked up to every machine and his hands and feet were wrapped up to help his circulation. His oxygen levels would not stabilise and we were taken into a room and told the next 48 hours where critical.

He survived coming off the ventilator four days later. He was in a bit of a sorry state and had a new infection from a line in his neck. His right foot and some toes on his left foot were black.

On the first of February Noah was taken into theatre where his lower right leg and two toes from his left foot were amputated. He had multiple skin grafts - but was alive.

He took to his prosthetic quite well and was a normal 3 year old. Unfortunately he can, for this time, no longer walk and is in a wheelchair until he has another operation to sort his stump out. 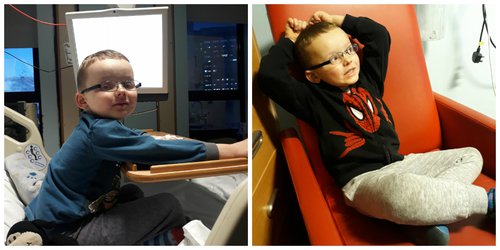 Since going through meningitis, Noah has had further surgeries, and his growth has not been straight-forward. He has just had more surgery to his scars and another bit of his toe removed, and is now at home recovering with his favourite food and lots of Minecraft!

We've been told that its still just a case of watching and waiting - but its so hard as a parent. I couldn't be prouder of how brave he is.