Oli had contracted pneumococcal meningitis and his parents together were faced with taking the agonising decision to turn off his life support. Abi, from Banstead in Surrey, tells their heart-breaking story here to support our 2022 Ribbon Appeal.

“Oli first became unwell on the evening of 22 May. We had put him to bed as normal after his bath and bottle and although he initially fell asleep he woke up a couple of hours later, unhappy and hot. As we tried to give him Calpol to help with his temperature, he was immediately sick. Although he stayed hot, he stopped crying and we put him back to bed again. He remained unsettled during the night, but I wasn’t unduly worried.

“The following day, he seemed brighter in himself, and he no longer had a temperature. We were due to spend the day at a friend’s house and as Oli seemed better I didn’t cancel these plans. All day though he refused his food, and drank much less from his bottle than he would normally. He also slept for longer during his normal naptimes, and it was clear he was obviously still feeling unwell.

“I put him to bed early and he fell asleep quickly. Tom was out that night, and having got the twins down at a good time as well I thought I was going to have a nice quiet evening

“But just before 9pm, I heard Oli crying. He was again very unhappy and very hot. I was worried about him as I knew he’d had reduced fluids that day and I wanted to get his temperature down quickly. But again, when I gave him his medication he couldn’t tolerate it and was sick.

“I called my dad (a retired GP) to ask for some advice, and he suggested that it was likely that he had an infection and it was therefore probably better to get some antibiotics into him sooner rather than later if this was the case, and that I should therefore take him to A&E to get him looked at. We are not the sort of parents who take their child to the doctor unless we’re really quite concerned, but I was. I was so worried in fact, that as Tom was out I went and asked for our neighbours help in babysitting the twins so I could take Oli to A&E without delay.

“It took a while to be seen in A&E, and when they took his observations he was noted to have both a significant high temperature and raised heart rate. They gave him some paracetamol and a few hours later we were discharged home, with a diagnosis of Oli having a virus. We arrived home at about 2am in the morning. Tom was waiting up for us and we put Oli to bed straightaway. He was quiet all night long.

“That morning of 24 May I was due to meet a friend to go shopping. I left the house just after 8am and I remember being surprised that Oli wasn’t awake, but I put this down to his late night and assumed he simply hadn’t had enough sleep. He didn’t feel hot to the touch and I was happy that he didn’t appear to have a temperature. Tom woke Oli up at 9am. We’d had instructions from the hospital to keep his temperature down and his fluid intake up, so Oli had further paracetamol and although sleepy while he had his bottle, he drank the full contents. He didn’t cry or appear unhappy, just very tired, and after his bottle he fell asleep again.

“I came home at lunchtime to find Tom having a cuddle with Oli on the sofa. I was immediately struck by Oli’s skin colour, which seemed very pale, and he almost looked jaundiced. I remember being concerned but Tom and I rationalised our fears, knowing that he had seen a doctor less than 12 hours previously and that we were following all the advice we had been given. We were surprised how much he was sleeping that day, but we just thought that he must be feeling terrible in himself and that he was obviously most comfortable sleeping off whatever illness he had.

“Later that afternoon I woke him for a feed. He wouldn’t really make eye contact with me, and seemed to stare through me. He still had no temperature, and took his full bottle of milk. I actively tried to keep him awake and he managed this, but he obviously wasn’t happy. He never cried, but he wasn’t himself.

“My dad came to stay with us that afternoon. Oli managed to give him a half smile, but my dad noticed that Oli’s breathing rate was faster than normal. He also felt his fontanelle and believed it to be raised. At this point I immediately left the house with Oli to take him back to A&E, which was 10 minutes away, leaving Tom and my dad to look after the twins.

“When I checked into the reception and told the lady Oli’s symptoms we were rushed into the Resus area and I heard a paediatric emergency alert go out over the tannoy system. Suddenly what had been an empty room was filled with about 10 people and I was left watching while they started to work on Oli, obviously getting fluids and drugs into him. I was told that somebody would come and speak to me as soon as they could, but they needed to concentrate on Oli for the moment. I was advised that I should call Tom and get him to the come to the hospital asap.

“It was evident that Oli was very seriously ill. I could see that he was fairly non-responsive and due to his raised fontanelle, I believed he must have meningitis. The doctor confirmed this was the basis that they were working on and that they had started him on the treatment for this disease. We were told that due to the severity of Oli’s illness that they would be calling the paediatric intensive care retrieval team, as it was likely that Oli would need to be transferred to another hospital with a paediatric intensive care unit. We were also advised that to ensure Oli could be given the best possible chance they would ventilate him to allow his body to rest. We asked the doctor if Oli was going to die and were told that he was a very sick little boy. The look on the doctor’s face told us everything we needed to know. 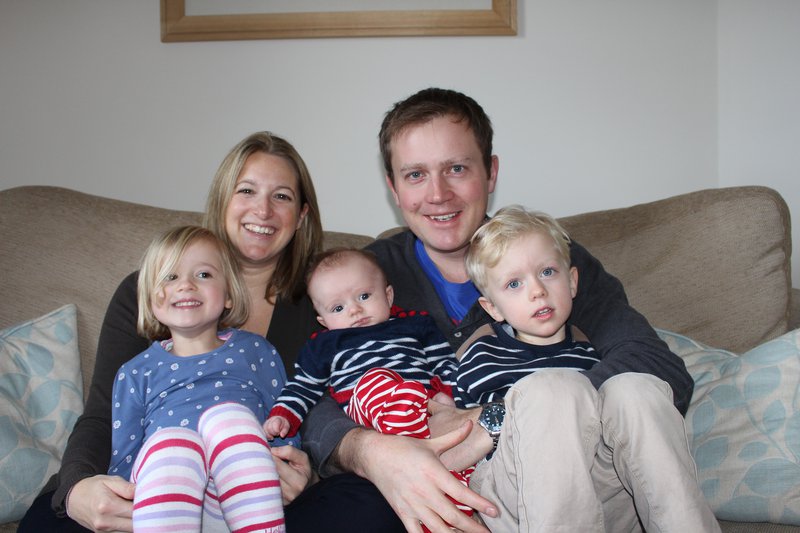 Stroking his head and whispering ‘Mummy loves you’

“Before they ventilated him, we had a few moments with him by ourselves, and I remember stroking his head and whispering to him “Mummy loves you”. He opened his eyes and made direct contact with mine. It would be the last time I would ever see them.

“We were put into the relatives’ room while they ventilated him, and after 20 minutes we were allowed to be with him again. By that time the retrieval team had arrived and we were comforted by the fact that he was receiving the best possible care. We were both able to travel in the ambulance with him to the Evelina Hospital, something that we will be always grateful for.

“Oli remained on full ventilation throughout the night in the paediatric ICU. They attempted to lessen his sedation in the early morning but Oli struggled to tolerate this. Tom returned home that morning to check on the twins, and to pick up a few things for us while I stayed with Oli. When he returned a few hours later and spoke to Oli, Oli moved in response to Tom’s voice. It was the first movement we had seen since he had been ventilated.

“Oli began to deteriorate in the early afternoon and had an urgent MRI as he wasn’t responding to the treatment as expected. Although the first results of the MRI were positive we were subsequently told that Oli had suffered a severe hypoxic brain injury. It was the most devastating news to hear, but the doctors said they would continue to monitor and treat him and hope for improvement. We didn’t know what to do with ourselves and went for a walk to get a coffee. On our return to the unit we found a nurse on her way to find us. Oli’s condition had deteriorated further and she told us not to be concerned by the amount of people and activity going on around him.

“I remember stroking Oli’s head and registering how cold it felt. After some time, the staff stopped working on him and told us that the consultant would be doing a few more tests and would then come and chat to us. We watched in silence as he did this, but with the growing realisation that the news we had feared was about to be confirmed. And it was. Oli was confirmed to be showing no sign of brain activity and that it was now only the ventilator that was keeping him alive.

“Tom and I then together made the decision to turn off his life support. A decision that no parent should ever be faced with and one which we will never forget. It was clear to us though that ‘our’ Oli, our perfect 7-month-old little boy, had already left us.

“Oli was subsequently found to have died from pneumococcal meningitis. Despite being fully vaccinated he died from one of the strains for which there is currently no vaccine.

“In the seven months that we were so blessed to have Oli in our lives he brought our whole family joy, happiness and laughter. The impact of his unexpected death is something that cannot easily be explained. Quite simply it devastated us and changed us all forever. We will never understand why he died, though our grief has changed over the years, it has never lessened, and we continue to hope that something positive can come out of the journey that we find ourselves on.

“Meningitis is life changing. It stole Oli’s life – who knows what future he should still be fulfilling. For his older brother and sister it took away their childhood innocence. Only time will tell the longer-term impact of them losing their adored baby brother when they were only 4-years-old. For our youngest daughter, she will forever live in a world knowing she had a brother whom she never met. For our family, forced to watch Tom and I in the darkest of places whilst also grieving their own huge loss, it changed everything. For friends, desperate to help, yet powerless to, it forced them to have new perspective on life.

“Nothing will bring Oli back to us. To the outside world we are ‘strong’. To a stranger looking in our lives we probably look like we have it all. A happy family of five, a dog, a house that feels like a home. But we are good at fooling people. We smile, but we want to cry, we talk but we want to be quiet (because no words can adequately explain what’s going on in our minds and hearts), we are so very good at being ‘happy’. But the wrongness of losing a child can never be made right. It can’t be fixed, mended or even cried away. No matter what, Oli is always missing. No matter what, our family is always achingly incomplete. We do not choose to be strong. We have no choice.”

Dedicate a ribbon and donate

With an average of 22 people and families every day being hit with the devastating news that they’ve contracted meningitis, why not make your donation £22? Whatever the amount, every £1 donated goes towards our vital work fighting meningitis.

Buy tickets for the Gloucester Cathedral Christmas Concert on 2 December