"It all began on a Sunday evening in April 2008, when Paige had a temperature of 38.7 degrees. I'm not the kind of person who gives my daughter Calpol very often but I knew that it would bring her temperature straight down so I gave her the recommended dose."

"My hubby and I settled down to watch a movie. About two hours later Paige started screaming. It was not her normal cry. I went to her room but she was still very hot. Her temperature was now 39.1 degrees and I wasn't sure what to do. As the Calpol had failed to work, my gut instinct told me something was seriously wrong. I called NHS direct who advised I could administer Nurofen for children as well as Calpol so my hubby went out, found an all night garage and we gave her that."

"She settled and her temperature returned to normal. But Paige awoke with a slight temperature so I gave her Calpol and booked an emergency appointment with our doctor. By the time we got there the Calpol had done its job and Paige happily babbled away to the doctor, who said she felt it was a viral infection and conducted a urine test. Paige perked up and was fine all day so I took her to nursery and went off to work as normal."

A call from nursery

"At about 3.30pm I received a call from the nursery to say her temperature was 39.4 degrees so could I go and collect her. On the way home I called my mum, who said not to panic."

"Looking back I knew then something was wrong. I took her to the out-of-hours doctor, as her temperature wouldn't go down. He also said he felt it was a virus and if her temperature went above 40 degrees to take her straight to the surgery."

"By Tuesday morning her temperature was strangely low. I remember thinking to myself that in a bid to cool her down I had frozen her! That was all to change as by 1pm, despite Calpol and Nurofen, it peaked at 40.2 degrees. She was making a very strange grunting and kept arching her back while sleeping and holding herself stiff when awake."

"I knew something wasn't right but meningitis had never crossed my mind as there was no rash. I returned her to our doctor who sent her to hospital. Despite being told via fax of my doctor's suspicions when her temperature dropped slightly, Paige was responsive again and they didn't see the need to do blood tests. We were sent home with a 24-hour open access to the children's ward."

"The following morning I awoke at 9.30am. Fear set in - I hadn't heard Paige. I went in to her room and she had the familiar temperature again so I gave her medicine. She refused a bottle. As the hospital said she had a "very nasty viral infection", my husband suggested I let her sleep it off."

"But my guardian angel was looking out for me as about an hour later I told my hubby I was going to bring her down for a cuddle regardless. I have always stroked Paige's head even when I was pregnant with her as she was breech and I knew where her head was. So, as normal, I stroked her head and felt a bulging fontanel. The soft spot was hugely raised so I called the hospital and we took her in."

The doctor who listened

"Finally a doctor there took us seriously. He pretty much immediately performed a lumbar puncture, describing the fluid as 'very cloudy'. Even then meningitis hadn't occurred to me."

"We were moved into a private room. When I was sat holding Paige, I remember seeing her eyes rolling and saying to my mum: "That's not right. Get someone!" As I said this our consultant arrived and told us the diagnosis. Paige was wired up, pumped full of needles and given drugs. I was numb and I have never ever been so scared, even more so when the heart monitor dropped and her oxygen levels fell."

"It took us over two weeks of medication before we could take our girl home. So far, one year on, I believe we are one of the luckiest families to ever deal with this terrible illness."

"Paige had had her pneumococcal vaccine injections but the strain she had wasn't covered by this. I believe she would have been covered by the new version of the injection and the doctor called it pure bad luck that she had got it. Bad luck or not, luck was on her side - Paige not only survived but has full hearing and no obvious long-term after-effects yet."

"Mums should not let doctors make them feel neurotic. It was only our persistence that meant we have what we do today - a happy healthy daughter. I think my husband and I have been more traumatised than Paige, who is now the most amazing two-year-old you could meet."

Paige and her mother Sarah have been in touch with us again to bring us up to date with her story, what’s happened since and how she is doing today as a 12-and-a-half-year-old.

“Paige at the age of 4 became a sister and sadly a short while before her 5th birthday myself and her dad separated. She was struggling immensely at school with social isolation and terrible meltdown type behaviour, lashing out and physically injuring herself, myself and her sister at home, so I sought help from our doctor, thinking it was just a stressful time taking its toll on her."

“Our doctor was aware that the meningitis could cause damage to hearing and also the swelling of the brain could cause longer term problems. I had also mentioned to our GP that I had noticed sometimes Paige wouldn’t respond to me as if she hadn’t heard me. They performed a further hearing test and, now she was older, it was a different type of test than the one she had after her illness. This test showed her to be unable to hear hardly at all in her left ear. She was fitted with a hearing aid and had a CT scan, which showed that her cochlear had almost disintegrated as a result of the meningitis."

“Paige had our local authority SENSS worker to help her and the school adjust, so she could hear better in school. Paige doesn’t wear her hearing aid anymore (she said it didn’t help and she compensated in her own way)."

“Paige continued to struggle, so our GP wanted it to be looked at and referred her back to paediatric doctors, who after some checks on her health and finding no physical reason referred us to CAMHS. Paige, after a long waiting and evaluation process, was diagnosed with ADHD at 9 years old, for which she began medication. This helped her learning and helped her a bit socially."

“However, certain things still didn’t improve with her emotionally, her reactions to certain things such as noise or textures or atmospheres. Paige also struggled to a degree with communication (we joke it’s all about Paige, if she’s interested she will talk about it, if not she will talk about what does interest her!) or with instructions and taking things very literally (sarcasm is not a thing in our house!)."

“CAMHS referred her for an ADOS (Autism Diagnostic Observation Schedule) test, which resulted in her being diagnosed with moderate ASD (Autism Spectrum Disorder) as well as ADHD (Attention Deficit Hyperactivity Disorder)."

Was hitting all her milestones

“I have asked doctors but am told by them that no-one will ever know if the autism and ADHD is as a direct result of her meningitis, or if she may have been born with this as she was so young when she had meningitis. However, I do know that prior to the meningitis she was hitting all the milestones she should."

“It has been a really long process but Paige is now a sociable (within her own limits) happy girl who is very aware of what she went through when she was so young (she found her story on your site while reading about meningitis!). She has a very good group of friends who look out for her and embrace her quirks."

“I still thank our angel for that day and despite the process we have been through over the past 12 years, the hearing, ADHD and autism, we are so grateful and lucky to have left the hospital with our girl, and we continue to fight for her progress every day. This girl teaches me things every day not just about her but also about me. Paige is literally my hero!” 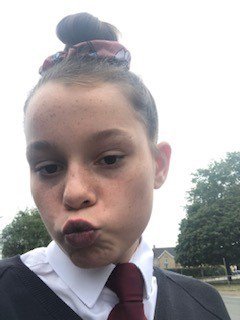