Patrick had contracted meningococcal meningitis and septicaemia, but after a stay in hospital and antibiotics he was able to return home, with no long-term after-effects. Amanda, from Congleton in Cheshire, recounts their story here.

“Our son Patrick had his MMR and pneumococcal meningitis vaccines when he was 16 months old. We had been warned that he could be unwell for seven to ten days after receiving the injections so we had Calpol on standby."

“Sure enough a week later he got an extremely high temperature and the following day I noticed he had small red spots on his chest, arms and legs, so I made an appointment at the doctors."

“As I had been expecting to be told the spots were a normal side-effect from the injections I had offered to see a nurse rather than a doctor. The nurse told me the spots looked like chicken pox but I wasn’t offered an appointment with any of the doctors (which in hindsight might have been advisable) or given any advice about how chicken pox progresses, so instead I went to the chemist and bought some Piriton."

“When I called nursery to let them know Patrick wouldn’t be in they told me three other children had chicken pox that week, so that confirmed to us it was chicken pox. By Friday (three days later) Patrick appeared to be getting better and the spots had almost gone (meaning in hindsight it probably wasn’t chicken pox)."

“However, by the evening Patrick was being sick (several times), was off his food, was very clingy and very sleepy. Talking to a friend she told me she had heard that babies could be very sick following the MMR (again lack of or misleading information) so we assumed it was a mild reaction to that."

“We put him to bed slightly earlier than usual and he slept through to Saturday morning. When changing his nappy in the morning I noticed some purple-ish marks on his legs and arms – not many though and certainly not a rash as you always hear about. Normally I would have been more concerned but because of the MMR injection and chicken pox suspicion we didn’t think it was anything serious."

Only wanted to sleep

“We even looked at an MMR website, which showed babies who had had the MMR and had similar marks. That day all Patrick wanted to do was sleep and he seemed unable to hold anything down. We were concerned he could get dehydrated and tried everything we could to give him water."

“On Sunday morning Patrick was sleepy, floppy and wouldn’t eat or drink anything. We tried calling NHS Direct but gave up after 30 minutes and decided to call later. We looked to see which local chemists were open so we could get some professional advice and even discussed taking Patrick down to the Emergency Surgery open on Sunday morning, but thought it wasn’t an emergency!"

“We eventually got through to NHS Direct at about 12pm and on their advice took Patrick to Macclesfield A&E. When they removed his baby grow I was shocked at how many marks he then had. I remember someone rushing over to the counter and asking for staff to come from the children’s ward."

“Suddenly there were a lot of people around. He was taken into a room signed Critical Care while lots of medical staff worked on him. We were very shocked to learn that he did in fact have meningitis and he was a ‘very poorly little boy’."

“Patrick was very dehydrated and because they were unable to find any veins to inject into they had to inject directly into his bone marrow."

“We were told he might have to be moved to a bigger hospital (further away) where they have intensive care units. At about 5pm a sister and consultant arrived from North Staffs Hospital to advise the staff at Macclesfield Hospital on the best treatment for him."

“The doctors kept telling us what a strong little boy we had and after they were satisfied that Patrick was reacting well to the drugs we were told we would be able to stay at Macclesfield hospital."

Took it in turns to stay the night

“My husband and I took it in turns to stay the night with Patrick, sleeping on a camp bed in his room. Patrick was on a drip until Tuesday evening and had four cannulas in different parts of his body to inject the antibiotics into (which he had to have four times a day) and take blood samples from."

“By Wednesday Patrick was more aware of what was going on around him and we were able to hold him for the first time. By Thursday he was sitting in his cot and playing with toys and by Friday they were able to change the antibiotics (which he found very distressing to receive) to just once a day."

“Patrick stayed in hospital for a total of eight days and over the following week Congleton Home Team visited daily to give Patrick antibiotic injections. My husband, mother-in-law and myself all had to have preventative treatment as we had all had close contact with Patrick a week prior to him catching it. Fortunately he hadn’t been in nursery the previous week otherwise other children may have caught it.” 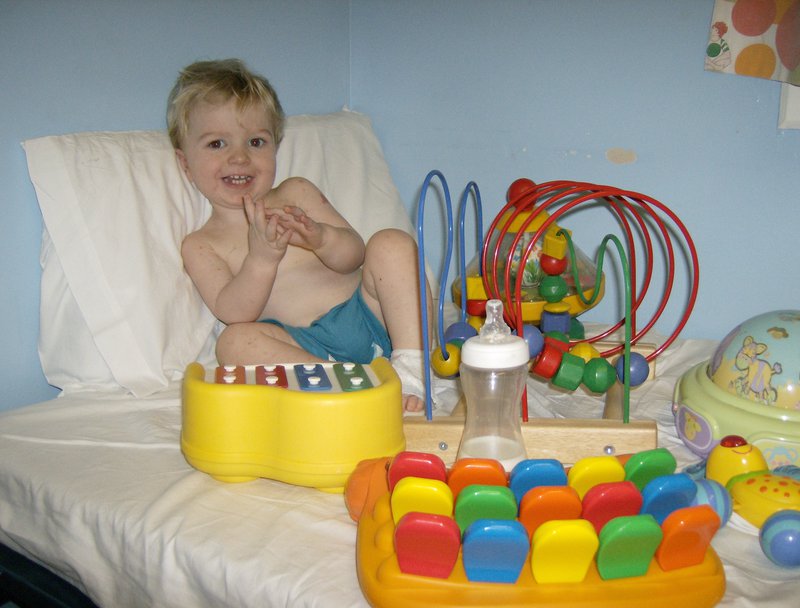