Devastated mum, Terri Lewsley-Lewis, 22, from Nottingham, watched helplessly as doctors gave her son just hours to live. Luckily, Taylor is a fighter, but the impact of the disease was life-changing.

“Taylor first fell ill on 20th April. I put him to bed as normal but in the early hours of the morning I noticed he had a temperature. He was boiling hot but shivering as though he was cold.”

“I immediately called NHS Direct to tell them his symptoms and was told to call an ambulance.”

“Shortly after going to hospital Taylor seemed to perk up and we were sent home.”

"After going home he rapidly went downhill. He wouldn't eat or drink and I noticed his face turning blue and a rash appeared. I called for an ambulance."

“The rash quickly spread all over his tiny body and doctors warned us that he might not make it. They gave him just hours to live and I had the difficult task of calling all our family to come and say their goodbyes.”

"His whole body was shutting down and his face and limbs were turning black - I knew then that if he survived he would lose his leg, fingers and toes. There was nothing we could do other than hope and pray he made it through."

“Taylor spent 17 days in an induced coma before he gradually started to improve, but, he needed his fingers, thumbs, toes and left leg amputated through the knee. Taylor's kidneys also failed and he was left on dialysis.”

"Since Taylor underwent the operation he has gone from strength to strength. I was so relieved he had survived and we all focused on his recovery rather than his lost limbs."

“He’s such a brave baby and can't stop smiling – throughout his hospital stay he stunned doctors and nurses by continuing to smile and giggle.”

Determined not to let meningitis destroy his future

“Taylor is now 11-months-old and will need life-long care. He will stay in hospital until November as he needs regular skin grafts. I can't believe just weeks ago I was told he wouldn’t survive. He’s a little fighter.”

"The whole experience was horrifying but I tried my best to stay positive. All I cared about was him surviving.”

"We are determined not to allow meningitis to ruin Taylor's future. He was always such a happy, smiling baby before he was diagnosed and despite everything he’s been through, that hasn't changed. He's such an inspiring little baby and I'm so proud of him.”

Terri and her family have been fundraising to support Meningitis Now. To make a donation to help Taylor and his family visit: www.gofundme.com/RunforTaylor 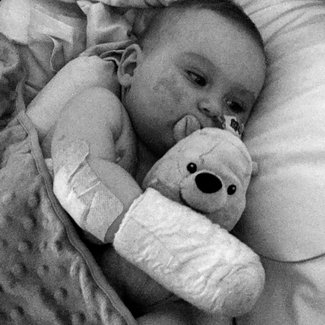 Meningitis Now supports families all across the UK who have been affected by meningitis, but without your help and generosity we wouldn’t be able to give them the support they need. Please donate now