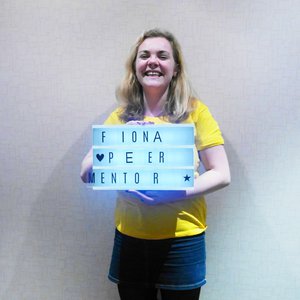 After being discharged from hospital, I knew I had to do something to raise awareness and money to fight against the disease

I developed a pins and needles feeling in my feet, which moved up my legs until they felt numb. However, this quickly disappeared. The same feeling moved up my spine and over the top of my head, before moving towards by fingers and hands, and then finally my mouth. My teachers thought I was having a stroke, and I was completely confused. My memory after this is slightly fuzzy, although I do remember arriving in A&E, and screaming the place down in my confusion and fear! The next thing I knew, I was waking up in intensive care at 5am the next morning. That in itself was a frightening experience, as I was hooked up to multiple machines which had been keeping me alive through the night.

I was quickly moved to a general ward, where I had time to recover and experience the nausea and illness that goes along with antiviral and antibacterial IV drips whilst they tried to figure out what was wrong with me. Apart from this though, I felt fine, and so it was not obvious that something like meningitis had gotten into my system.

Despite all this, I did make an exceedingly quick recovery with no long-term side effects, and so I count myself as hugely lucky. It took the hospital a full week to diagnose me, because my symptoms had been so unusual- you don’t need to get the rash in order for it to be meningitis.

After being discharged from hospital, I knew I had to do something to raise awareness and money to fight against the disease, which had scared my entire family senseless. In 2012 I organised a week of fundraising, over the anniversary of when I first contracted meningitis. This included a concert, and a team of us completing the Great Edinburgh Run.

Over the course of this week, I managed to raise over £5500 for charity, when my goal had been to get to £1000. I was so overwhelmed by the generosity and support I received. My fundraising was also mentioned in our local paper, where they not only spoke of my event planning, but also of my full experience of meningitis.

Since then, I have spent my time trying to complete my school exams and move on to the next part of my life. I have some wonderful friends and family who helped me through the whole experience, and also helped me maintain my sanity whilst I was fundraising!

I now live in London. I love singing and writing music, and I am frequently found at one of the many theatres in London. I wanted to be a peer mentor in order to support others through life after meningitis.